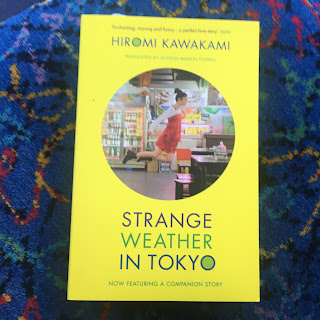 After enjoying a few Japanese novels of late, I decided to give Strange Weather in Tokyo a chance. First published in Japan in 2001 it tells the story of Tsukiko, a woman in her late thirties who befriends and eventually falls in love with her former schoolteacher, an eccentric and pig-headed old man she dubs Sensei.

Although I found the premise very interesting, the story fell a bit flat for me. It's not quite a romance. It's not quite a black comedy. It's a story of two lonely and unlikable people who aren't always terribly nice to one another, or to anyone else, really, who drink a lot and eventually fall in love despite a huge age gap between them. I found parts of the novel very difficult to relate to and I suspect that a lot of the nuances about life in Japan went straight over my head. Each chapter focuses on a meeting between Tsukiko and her Sensei, and shows how they gradually become closer.

The writing style will no doubt appeal to readers who like as much sensual detail packed into as few words as possible.

Overall, I didn't enjoy this one anywhere near as much as I hoped to and I feel it will have broader appeal to readers who are better versed in Japanese culture and society.