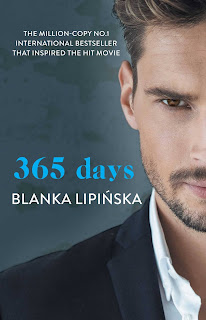 There are times when I pick up a book for all of the wrong reasons and this is one of them. It's not every day that I get to read a book set in Poland, and when I do, they nearly always feature a certain tragic event from history that we must be careful to never forget. On this occasion, I picked up 365 Days because it was a contemporary romance that was written and first published in Poland, and went on to become a bestseller. How interesting to have the modern Poland as a (partial) backdrop and a Polish lead character. Unfortunately 365 Days proved to be less about my personal desire to be an armchair tourist and more about trying to, well, better Fifty Shades of Grey at every turn. (It has already been made into a film.) This isn't so much a contemporary romance as a novel about toxic longing.

Don Massimo is a Mafia Boss with a fetish for blow jobs that cross the line into sadism and a dark haired women that he had a dream about. For years, he's obsessed about this unknown women of his dreams to the point where he has paintings of her all around his house. Then one day he randomly spots Laura Beil and her boyfriend, a Polish couple who are holidaying in Sicily. Within hours he had abducted Laura and plans to keep her captive for the next 365 days. If she doesn't fall in love with him within that time, he will allow her to go home. But if she escapes, he will kill her family.

What might make a compelling plot for a thriller turns into a sadistic, and occasionally ludicrous bit of pornography disguised as a romance. While Massimo's gestures are supposed to be sexy and romantic, and show just how much he cares, they came across to me as abusive and controlling. And occasionally downright stupid. I did not find many of the aspects of the story as tittilating was they were no doubt intended to be. But maybe that's just stuffy old me and my inability to differentiate between fiction and things that I think people should go to jail for if they did them in real life. Maybe other readers love the escapist aspect of the novel and the voyeristic aspect of what imaginary rich and powerful people might do behind closed doors. The ending itself feels strangely well, unclimatic. Apart from the cliffhanger on the very last page, it doesn't really feel as though the author was building toward any kind of ending at all.

This one wasn't for me, but it might have something to offer adults who are looking for an easy read with plenty of kink and some darker elements.