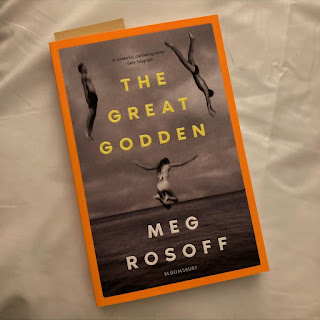 Every summer, a family travels to the beach house that has been theirs for generations. For several idyllic weeks, they fill their days with easy summer fun, joined by their cousin and her beau, who stay at the neighbouring house. This year, however, something is different. First, cousin Hope is to finally marry her beloved partner Mal. And then the children of Hope's Godmother, actress Florence Godden come to stay. While Hugo is sullen and silent, Kit is charming. And utterly irresistible.

The question is, how much trouble can one teenage boy cause for one family over the course of a single summer.

This may be a big claim, but I think with The Great Godden we have a modern classic on our hands. The story is both familiar and unfamiliar in a pleasing way. In Kit Godden, we have a character who embodies all of the traits of narcissism. Handsome, charming, manipulative and most of all dangerous. And even though we know from the details given in the first chapter that things are going to go badly this summer, we don't know for sure what is going to happen. Just we know very little about our narrator--we know only for sure that they are the oldest of four siblings, that they intend to study at art school, that they don't really get along with the next youngest sibling, Mattie, an attractive and intelligent girl of about sixteen, and that like Mattie, they fall for Kit Godden. What we don't know is the narrators name, or their gender. (From evidence given in the book, I'm leaning toward the idea that they are a very tomboyish girl, or possibly non-binary. This makes sense on a number of points in the novel, for example where Hope tries to broach the subject of them being in the wedding, and, later, when they are not invited to the male bonding sailing trip, although Kit is. Hugo isn't invited either, but that may have more to do with his general lack of responsiveness toward group activities.)

Overall, The Great Godden is a well written coming-of-age story, describing the beauty of summer days, first loves and heartbreaks and the discovery that people are not always what they appear to be on the surface. Through Kit, the novel touches on the devastation that behaviours like gaslighting and treachery can do, and though our narrator, we see just how harmful obsession can be.

Every time I sat down with this book I found myself reading a chapter or two more than what I had initially intended, if not more. This is the second novel I've read by Meg Rosoff and I found this one to be the better of the two--and How I Live Now was a good book!

According to a recent interview Rosoff is intending to write two more summer books and is halfway through the second one, though it is unclear whether they will feature any of the same characters.

Overall, this is an exceptional read. Highly recommended.