Review: Light of the Jedi by Charles Soule 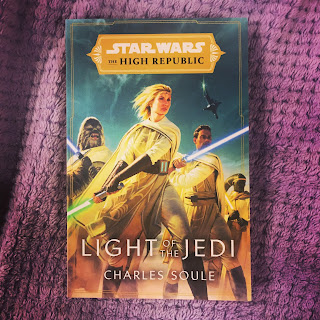 It has been a long, long time since I last read a Star Wars novel. More than ten years, in fact, well and truly predating this blog. Anyway, recently, I spotted Light of the Jedi in Dymocks Rundle Mall and it looked like a nice title to start off with. In fact, it's a new release and the first in the new canon High Republic series, set before the events of The Phantom Menace. The series is intended to be print only, and will be featured in various novels, short stories and comics, pitched at varying reading levels and audiences. Light of the Jedi is an adult book and tells the story of The Great Disaster, where a ship is torn to pieces after the Nihil, a group of space vikings find a way to block the lanes in hyperspace. The result is a lot of casualties, including a great number of Jedi who rush to the scene.

And that's really it. I had the feeling that this one was more of a vehicle to introduce readers to The High Republic, and the role of both Jedi and Nihil within. The narrative was crowded with characters and I felt that I didn't get to know any of them in a meaningful way, which was kind of annoying as I had a real soft spot for Burryaga Agaburrya, the Wookie (and Jedi Padawan) featured on the front cover. The story is action packed enough and the author's love and knowledge of Star Wars shines through.