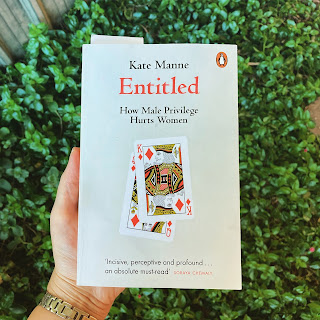 Australian philosopher Kate Manne's Entitled is a powerful book. Over ten chapters, Manne examines the notion of male privilege--what it is and how it hurts women. And my goodness, does it pack a punch.

Entitled is an academic book, but it one that is written in a way that is clear and accessible. Manne covers a wide range of topics, from unconscious bias (and how men benefit from this,) to consent to bodily control to domestic labour. I found myself nodding in agreement at some of the arguments, and I found myself shocked and surprised at others. Manne is based in the United States, and the book was first published there, so naturally, there were a number of important issues happening in the United States that I had little-to-no knowledge about.

Considering certain current events, I would consider Entitled to be a very relevant read right now, one that I hope will explain why so many women are upset and are protesting (hint: certain politicians are just the tip of a very widespread problem.) And no, male privilege doesn't mean that all men are bad. It doesn't mean that all men are chauvinist pigs. It means that men are more likely to benefit from an unconscious bias that men are smarter, more trustworthy and more capable than their female counterparts. It means that survivors of sexual assault are less likely to be believed that the accused, who, as we are so often reminded, is innocent until proven guilty. It means that the people making laws and decisions that impact on the lives of women may not always fully understand or appreciate the experiences of women.

Let's hope that Entitled is part of a movement that changes all of that.

This book was read for the Aussie Author Challenge 2021