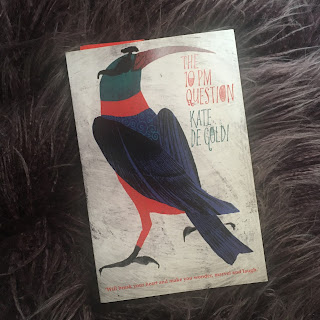 Beautifully written and set in New Zealand, The 10PM Question tells the story of Frankie Parsons, a year eight student on the cusp of adolescence who has a habit of worrying about well, everything. When a free spirited new girl arrives at his school and the pair develop an unlikely friendship, Frankie finds himself changed in a number of surprising ways.

This was an entertaining read. While the subject matter, of a kid who worries a lot, has the potential to be treated like a comedy, the author takes her character and the subject matter seriously. And there is a lot of serious subject matter in here, from what it means to have a parent who is mentally ill to what life is like for kids like Sydney, whose life is subject to her mother's many whims. The author drip feeds the reader information, meaning that my assumptions about certain characters and situations were completely wrong. Although this technique is very clever and works well within the context of the novel, it did get on my nerves from time to time. Each chapter is spaced exactly one fortnight apart, perfectly showcasing how Frankie grows, slowly becoming less worried about everything, in that time.

One of the things I struggled while reading this novel was trying to find the target audience. To me, it felt like a very advanced, literary YA novel, one that I would give to a reader who was searching for something a bit smarter and a bit deeper. On the other hand, many of the themes such as friendship and Frankie's need to separate from his mother may be less interesting to teenager readers, who may have a sense of been there, done that. And parts of the novel feel very adult.

Overall, this is an entertaining read about a kid on the cusp of adolescence who is dealing with some pretty big things in his life.