Showing posts from September, 2018
Show All

Reason to Breathe is one of those books that is very much a product of its time. Originally self-published shortly after the release of Fifty Shades of Grey the novel and its sequels enjoyed such success that they were eventually picked up by Penguin Books and distributed to an even wider, and overwhelmingly enthusiastic audience, ones who were hungry for an emotionally charged romance. Other than that, this novel is completely unremarkable. Emma lives in a small town, the unwanted ward of her Aunt and Uncle. Her Aunt is abusive to the point where she is clearly psychotic, punishing Emma violently for imagined slights and keeping unfair rules. Emma's only solace is her best friend Sara and school, where she keeps up a high grade average and is on a number of teams and committees. She pushes the other kids away at school as she doesn't want them to know about her family situation. However, that all begins to unravel when Evan a new student, takes an interest in find
Post a Comment
Read more

Review: Donald and Mickey: Quest For the Faceplant by Disney Comics

This delightful Disney graphic novel is a compilation of some previous Walt Disney Comics and Stories issues, and stars a my favourite Disney characters--the titular Donald and Mickey, along with Uncle Scrooge, Goofy, Daisy and many other who I haven't seen in a Disney comic for years like Clarabelle Cow. Along the way there are many adventures to be had, such as Donald's trip to Africa in a quest for a rare plant, Mickey inadvertently getting caught up in an adventure while he and Goofy paint Minnie's fence, and Donald's nephews Huey, Dewey and Louie have fun aboard a riverboat with Garvey Gull, an adventure loving orphan.  Most of the comics and stories were originally penned in Europe, where the Disney characters remain steadfastly popular, and have been translated into English. Consequently, (as is often the case with translations,) there are moments where the humour doesn't work quite as well as it should--the comic where Donald and Daisy are actors on
Post a Comment
Read more

Review: The Rules of Seeing by Joe Heap

Nova is in her early thirties. She possesses extreme intelligence, an ability to speak many different languages and she has a good job with the police force. She also happens to be visually impaired. When she undergoes surgery to correct her eyesight, Nova suddenly finds herself in a world where the things that she knew no longer make sense. There is one beacon of hope, though, her friendship with Kate. However, there is one thing that may threaten to end their new friendship, for good. I purchased my copy of The Rules of Seeing after seeing it advertised on facebook by it's Australian publisher, the local division of HarperCollins. I was intrigued by the premise of an extremely intelligent woman in her early thirties learning to see for the first time, and, quite honestly, parts of that story are delivered well--Nova's confusion with depth perception, every day objects and wanting to go back to the way things were before her operation all seemed very plausible. The ru
Post a Comment
Read more

Grody to the max. Gag me with a spoon. Like, no way. This Garfield and Friends short from Season 7 tells a mildly entertaining story of how Jon has to babysit his bratty niece Shannon for the day. Preteen Shannon uses Valleyspeak, which, for the viewers amusement, is translated by Dr Moonunit. Within the context of Garfield and Friends, it's fairly standard cartoon fodder, there's a joke, a set up and Garfield eventually saves the day through a mix of his rebellious streak and his cynical (but accurate,) take on human nature. And all in just over eight minutes. However, there is some deeper satire at work here. Dr Moonunit's name is more than just an amusing joke. It's a tribute to Moon Unit Zappa, who is credited with inventing the term Valley Girl thanks to the song of the same name that she worked on with her father, Frank Zappa. But dig a little deeper into the Garfield universe and you'll also find this strip from the early 1980s: Coincidence
Post a Comment
Read more

Review: Letters to My Yesterday by Karyn Sepulveda

Three seemingly different women form a beautiful friendship in this lovely tale by debut novelist Karyn Sepulveda. Marie is 92 years old and runs a cafe at the front of the house that her windowed mother Rosie built during the 1920s. Dee is a frequent patron at the cafe, and the principal of a local public school that is undergoing some radical changes with the adding of an interfaith curriculum. Isla is a marketing guru, hired by Dee to help with the marketing and PR side of the changes at the high school. As the three women meet and bond at the cafe, the story weaves between the past and the present to tell the story of the challenges that each of these women faced. Dee came to Australia in the 1970s as a Lebanese Muslim and has faced many challenges since. Isla is a woman who has suffered a great loss, one that she blames herself for. Marie is the older and wiser woman who has seen it all--as we readers discover through the flashbacks of her life. This is an enjoyable read.
Post a Comment
Read more

What a joy--and a revelation--it was to re-read Carrie twenty years after I first picked it up as a slightly angry teenager. There's a reason why Stephen King is so well respected as a writer and his talent is obvious, despite this being his a novel and relatively short.  Told from two perspectives--from books and articles written after the big event, and also in short blocks that form the story of what led up to the big event, we know that Carrie White, an unpopular high school student with supernatural powers destroyed not just the school, but an entire town on prom night. From there, King delves deeper and deeper, not only tells us what happened, but the crucial factor, the why. And it's entertaining stuff. It's difficult not to feel sympathy for Carrie, the misfit who has endured years of ostracism from her peers and suffered all kinds of abuse at home from her mother a supposed Christian fundamentalist. We also discover the bit players who made this tragedy oc
Post a Comment
Read more

Review: Jane Doe and the Cradle of All Worlds by Jeremy Lachlan

Jane Doe isn't exactly welcome on the island of Bluehaven. In fact, the locals consider Jane to be cursed and have a special day each year where they burn effigies of Jane and her father. Shunned to live in a rat-infested basement with her father who is in a coma of sorts, Jane lives under the watchful eye of Mr and Mrs Hollow, an abusive couple who resent the task they've been given. At least their daughter, pyromaniac Violet, is nice.  Jane's adventure begins, however, when her father disappears. Sent into a realm that leads to all other worlds she must fight to navigate this strange new world as she searches for her father, and discovers some surprising truths about herself and her abilities. This one is a little bit Harry Potter, but with humour that is a little dark and, occasionally, a little bit off. I did not enjoy it as much as I had hoped to, though it had some entertaining twists and some great moments--in particular I enjoyed Violet's return. Act
Post a Comment
Read more

Former federal politician Richard Evans offers readers a thrilling, twisty ride in his debut novel Deceit. Set in Canberra, it tells the story of Gordon O'Brien, a soon to be retired clerk of parliament who, along with investigative journalist Anita Devin uncovers a scandal that could shake the nation to its core. Prime Minister Andrew Gerrard has a dodgy deal taking place with the President of Indonesia to fund an offshore immigration detention centre. The legislation should have passed quickly, and without suspicion, but Parliament is thrown into chaos when eight MPs are killed in a plane crash. As Gerrard tries to rush the legislation through, Gordon and Anita are busy uncovering the scandal and finding ways to foil the Prime Minister before he can get the bill through. The author has inside knowledge of the workings of Parliament and it shows, as does his talent for being able to work it into a story that is at entertaining and larger than life, while still being ut
Post a Comment
Read more 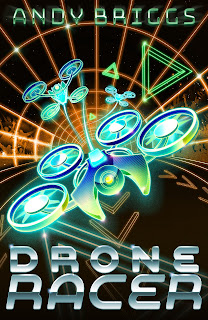 Hi everyone! Today I'm chatting with author and scriptwriter Andy Briggs, whose latest novel Drone Racer is released today by Scholastic UK.  This is an absolutely brilliant and insightful interview in which we discuss books, drones and film ... Hi Andy, thank you for stopping by Kathryn’s Inbox. First of all, congratulations on the publication of Drone Racer . I was quite excited to discover that this is the first children’s novel to be published about drones. Do you think that it is important for children to embrace new forms of technology? If so, why? It’s lovely to be here! I’ve always been a fan of new technology, especially when it emerges into the world and nobody is quite sure of how it will ultimately benefit our lives. A great example of that is the internet, without which we wouldn’t be having this interview!             I believe people of all ages should embrace technology, but in particular children. After all, that is what will be shaping their lives. I
Post a Comment
Read more

Prolific American author Catherine Coulter is back with her twenty-second FBI thriller. It opens with a twisty scene in which the young son of FBI agents Savich and Sherlock is almost abducted. Meanwhile, Ty Christie witnesses a murder on a lake--but when the divers find the body, they also discover a number of bones and a unique belt buckle. Naturally, there are plenty of twists, surprising connections and red herrings along the way in this explosive thriller. While I have no doubt that this one will please fans of the genre, this one was not so much of a hit for me. There's nothing technically wrong with the book--it's well plotted and does everything that is promised on the back cover.  This book was sent to me to review from Simon and Schuster Australia and I thank them for it, and for their generosity over the years sending me many wonderful book and exposing me to many new authors and, occasionally, even new genres.
Post a Comment
Read more

Review: My Life Next Door by Huntley Fitzpatrick

My Life Next Door is a sweet, fluffy teen romance with some sad bits, the kind of book that is suitable to pass on to tweens who are looking to read something a bit grown up, without the worry of the narrative being too, cough, cough, grown up. The plot isn't terribly original--Samantha Reed, a spoiled but often neglected rich girl, falls for the working class boy from next door and their romance is almost torn apart by tragedy--but the telling is light and breezy, and the leading characters likeable enough. There really isn't much that I can say about this one, but if you're looking for a light and safe romance, this one ticks all the right boxes.
Post a Comment
Read more
More posts