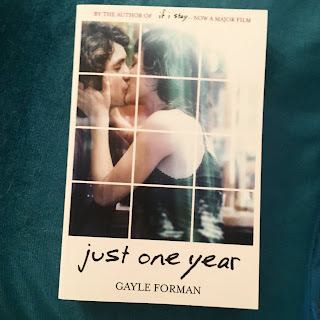 In Just One Day author Gayle Forman told the story of Allyson, a high school graduate whose life is altered when she spends one day in Paris with Willem, a boy who she barely knows. After being left alone, and stranded in Paris, she returns to the United States and the carefully made plans she had for college and her future begin to unravel. Just One Year tells Willem's side of the story--after suffering concussion he finds himself in a Paris hospital, uncertain whether the girl he travelled with to Paris was real or a figment of his imagination. He can only remember the nickname he gave her, Lulu. Over the course of a year, as he travels across the globe searching for Lulu, he slowly begins to acknowledge the events that have shaped his life thus far--being the only child of parents who were deeply in love, and the death of his father, the parent who ignored him least.

Just One Year is the story of how a caddish and seemingly uncaring young man with a never-ending string of suitors finally grows up and begins to take responsibility for himself. Contrasting with Allyson's journey in Just One Day where she learns to enjoy life and to live for the moment, Willem learns to acknowledge his feelings and to take a little responsibility for his future, instead of just expecting to drift through life. Of course, there's a lot of fun and some adventures along the way--I laughed out loud at the part where Willem unexpectedly gains an important role in a Bollywood film, and I got a little teary when I discovered Willem and Allyson's near miss in Mexico. I also appreciated author Gayle Forman's attention to detail--it's rare for an American author to acknowledge details like just how passionate the people of India are about cricket, and the excruciating boredom that comes from listening to a game of cricket being broadcast on the radio.

The perfect companion novel to Just One Day.