Showing posts from December, 2016
Show All

Five Go Gluten Free is a hilarious parody of modern day problems ... staring a slightly grown up version of Enid Blyton's beloved Famous Five who are navigating their way through adulthood and the 21st Century with muddled results. In this adventure, a grown up Anne is inspired to take up a gluten free diet after Dick gives her a new cookbook for her birthday. The others agree to go along with it, and the results are well ... lets just say it turns out that the five are human after all. (Well, four of them. Timmy is still a dog, even though Anne forces the diet on him as well.) This one is what it is, and it's great fun so long as you go in looking for a few laughs and nothing more. The pictures provide a lovely bit of satire, and other beloved characters from the series find themselves the butt of various jokes--I loved Uncle Quentin's car, which runs on peanuts and could explode at any moment. It never quite meets the benchmark for Famous Five parodies that was set
Post a Comment
Read more

Friday Funnies: I Wanna be a Doctor!

Review: The Mothers by Brit Bennett

It was a twitter recommendation that led me to discovering this beautifully written story of how one act, one secret and one summer has lasting effects on three adult lives. Told from the perspective of a group of older women from a small church in Southern California known as the mothers, who play a role within the church that is not unlike that of The Holy spirit. (And if one wants to dig deeper into the religious subtext, the Pastor and his wife are the cold and judging father, while the child born at the end may just well be the saviour ... for the characters in the story at least, anyway.) The first character we are introduced to, thanks to the mothers, is Nadia Turner, a seventeen year old girl who is smart, about to be the first in her family to go off to college, and, most importantly, she is grieving for her mother who committed suicide a few months earlier. It is the death of her mother that leads her into the arms Luke Sheppard, the twenty-one year old pastor's s
Post a Comment
Read more

Friday Funnies: I Wish It Could Be Christmas Everyday

Just thought I would share this Christmas song ... despite the fact that it is probably the Christmas song most universally hated by retail staff.
Post a Comment
Read more 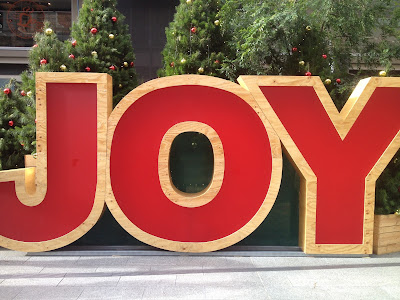 Although I was unable to take a great (or even decent) shot of these, it was lovely to see a new selection of Christmas decorations in Rundle Mall this year. Wooden blocks spelled out messages such as the one above. I also spied a sign that said Peace and another that read Merry.
Post a Comment
Read more

On select Sundays I will be reviewing some of the old Apple Paperback titles from my childhood. These titles were published, or republished by Scholastic during the 1980s & 1990s and were written and set in the United States. In Australia, these books were typically only available from libraries or could be ordered through catalogues that were distributed through primary schools. Most of these titles are now long out of print or have been updated and republished for later generations ... I remember reading Merry Christmas, Miss McConnell! when I was in year six at primary school and being quite taken with the story about three kids who have a lot of trouble relating to their strict new teacher. It is Christmas time and the beloved fifth grade class teacher, Mrs Jackson, has gone on maternity leave. Mrs Jackson is replaced by the strict Miss McConnell who orders the kids about by blowing a whistle and never seems to let them have any fun. It's a blow to the main charact
Post a Comment
Read more

Friday Funnies: Make a Daft Noise for Christmas by The Goodies

I know I've shared this one before, but just for a bit of a Christmas themed laugh, I thought I'd share it again. Funny song, funny group ... pity the crowd looks a bit bore every time the camera turns on them, but I guess the canned laughter sort of makes up for it ...
Post a Comment
Read more

The Better Son was an award winning novel before it was even published and it is not difficult to see why. The beautiful prose tells the story of Kip, the younger of two brothers, growing up on a farm in Tasmania in the early 1950s. Father Harold is suffering Post Traumatic Stress following his role in the Second World War, and also appears to hate farming, his wife Jess, and his youngest son with a frightening vindictiveness. By contrast, the older brother Tommy, is considered to be wonderful by Harold, and occasionally comes across as spoiled (and a little vindictive,) though he is not always treated well. One day, Tommy and Kip discover some caves near their farm, and the location becomes their secret hideaway. But tragedy is looming, and one day only Kip will come home.  Told in third person narrative from the perspectives of Kip and farmhand Squid, the story moves across a number of years. Secrets are revealed slowly, and over time it becomes clear how the lives of each o
Post a Comment
Read more

Shakespeare's Hamlet is given a very contemporary YA re-imagining by Australian author John Marsden in this occasionally creepy book of the same name. Marsden takes a common YA theme--honest teens battling against unfair and corrupt adults--and blends it seamlessly against the backdrop of a story about greed and madness. In this version, Hamlet is a teenager driven to madness by the need to avenge his father's murder, unsurprisingly, his mother and uncle/stepfather are controlling arseholes. Supporting characters Orphelia and Horatio are both in their teens and are written quite well, with themes of puberty woven into the plot. This one was published in 2008, but I had no idea of it's existence until a friend found a copy and emailed me about it. Any new or previously unknown John Marsden title is always a pleasant surprise. While this one may not be one of his best (let's face it, the Tomorrow Series is awfully difficult to beat,) it is an interesting quirky r
Post a Comment
Read more 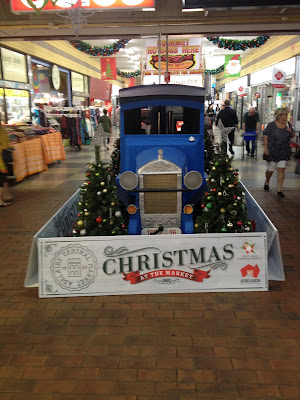 Beep! Beep! This genuine Pageant car pulled up in the Central Markets a little while ago and looks destined to stay there until Christmas Day. I think it looks great, and the Christmas trees are a nice touch.
Post a Comment
Read more

Just a bit of light and fluffy 1990s nostalgia this week, this short clip shows a new pair of foster kids entering Summer Bay for the first time. Shannon and Curtis were a pair of teens whose adoptive parents had died. Everyone thought that they were brother and sister, and were shocked when the pair shared a kiss, but later it turned out that they were only 'adopted' brother and sister. Their arrival is symbolic of a more innocent era from the series, where most of the drama revolved around troubled teens who (nearly) always learned to become responsible adults during their stay in Summer Bay, thanks to the gentle guidance of the adult residents.  Interesting contrast in the casting--both Isla Fisher (Shannon) and Shane Amman (Curtis) were seasoned actors by the time they arrived on the set of Home and Away. Both had appeared in short lived soap Paradise Beach and a number of children's television programmes. While Isla Fisher would go on to become a Hollywood lev
Post a Comment
Read more

One of the things that constantly amazes me about the Peanuts comic was how its artist and author Charles Schulz was able to say so much in one small square, with a simple, inked picture and a few words. This simple square captures perfectly some of the less pleasant feelings that we experience when we're in love with someone--stupid actions, barely thought through, followed by agonising moments of self-doubt.
Post a Comment
Read more

Review: Because You'll Never Meet Me by Leah Thomas

Because You'll Never Meet Me is a story told in letters, detailing the correspondence between teenagers Ollie, who lives in the United States, and Moritz who lives in Germany. Neither Ollie nor Moritz are ordinary boys--Ollie has an allergy to electricity meaning that he must live in a remote cabin with his mother, and Moritz, has a pacemaker (hence why they can never meet,) and an almost supersonic ability to see despite the fact that he literally has no eyes. Through their correspondence both will reveal their struggles with their peers (Moritz is a target for bullies, while Ollie struggles with Liz an 'ordinary' girl who wants to cure him rather than understand him,) and they will learn some remarkable life lessons, before a startling, life changing revelation is made ... Though a little gross in places, this one is a thought provoking read, one that seamlessly blends real life teenage themes with science fiction. Optimist Ollie is a contrast to the bitter and d
Post a Comment
Read more

This ad was is clever, memorable and oddly annoying. It also features something that an advertising agency could never get away with today--showing a child under the age of twelve eating junk food.
Post a Comment
Read more

Following on from my previous Kermit and Grover clip, I just couldn't resist sharing this little bit of fun and silliness ...
Post a Comment
Read more

Finding Cinderella is a short novella featuring Daniel and Six from Hoover's Hopeless series, and unsurprisingly, it's a romance. As always with Hoover's novels, the fun is seeing how the couple get together, despite the odds working against them.  It's been a long time since I read Hopeless  and I have yet to read it's sequel Losing Hope, so most of the minor characters were a little bit fuzzy for me. Fortunately, this one stands up pretty well on its own merit, detailing the unlikely romance between Daniel and Six. The novella begins with Daniel making out (and eventually sleeping with,) a girl that he meets ever day in a janitor's cupboard at their high school. He never sees her face or learns her name, but he hopes that one day he will. One year later, he's almost given up hope of finding this girl, when Six (the best friend of his best mate's girlfriend,) returns from a student exchange from Italy. The pair are instantly smitten in a way t
Post a Comment
Read more
More posts