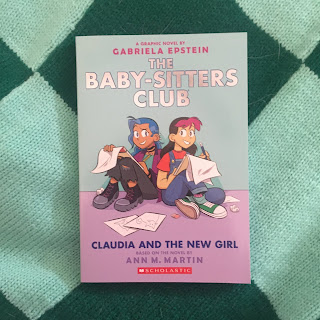 Fans of the BSC Graphix series will be sure to welcome new writer and artist Gabriela Epstein. With this latest volume, Epstein adapts the classic title Claudia and the New Girl and updates it perfectly, giving it a new and contemporary feel, without changing the integrity of the story at all.

Female friendship is at the heart of this story when Claudia makes a new friend at school. Ashley Wyeth is cool, hip and completely devoted to her art. She soon sees a kindred spirit in Claudia, and wants to help her develop her talent. But soon Claudia is neglecting her duties with the Baby-sitters Club, her friends in general and missing out on a lot of fun. And as for the other members of the BSC, well, they're all feeling pretty hurt and rejected and soon it starts to get nasty.

It has been a long time since I read the original and to be honest, it was never really a favourite of mine, mostly due to the nastiness between the characters. However, I think that Esptein truly fleshed out the story, offering readers a sympathetic glimpse into the reasons behind Ashley's behaviour. Unlike Claudia, who is an extrovert who is at her best when she's busy with a variety of things, and being around a variety of people, Ashley prefers to absorb herself fully in one task and has a smaller network of people. She has trouble understanding the differences between herself and Claudia, though it all works out in the end. And as for Claudia, she gets a little caught up with things at first, but soon realises that being like Ashley isn't going to make her happy. Eventually, the girls each put their best selves forward at an art show and are rewarded accordingly--with the full support of the other members of the BSC.

Epstein's animation style is different to her predecessors, putting her own spin on the characters while keeping the elements that we all know and love from the earlier novels--like Claudia's pink hair.

Epstein will continue to work on the BSC Graphix series, alongside a second author/artist, so that two books will be released per year instead of one. Kristy and the Snobs (book 11 in the original series,) will be adapted by Chan Chau and is set to be released in the United States in September. (The Australian release will probably be two months later, based on previous releases.) It is unclear which novels will be released after that, though it is likely that Good-bye Stacy Good-bye and Hello Mallory will be skipped.

Anyway, this was a fun fresh take on a classic BSC novel.