Showing posts from March, 2017
Show All

Last week marked the first week that I had officially read Lockie Leonard Human Torpedo from cover to cover, despite the fact that I was assigned to read it in my year nine English class. The first time around, I was fourteen years old, and resentful of the fact that the class had to one, read a book that had a boy as its main character (oh, how dreadful,) and two, that it was a realistic read set in contemporary Australia, rather than well, anywhere else during any other point in history. (Not bad for someone whose later academic career focused exclusively on Australian Literature ... and who included Tim Winton in their English Honours thesis.) Plus the feminist in me was annoyed that some of the other kids in my class kept calling Vicki Streeton a slut, when I felt that she was just as confused about things as Lockie, only in a different way. Consequently, I ended up skipping lots of bits and got a B for my assignment on the book. I found a copy of Lockie Leonard Human Tor
1 comment
Read more

What Might Happen if the Sorting Hat Vistied Kathryn's Inbox?

Every now and again, I like to ponder the unimportant things in life. Like why Cadbury eliminated the coconut ice piece in their 55g Snack bars. (Lucky for me, Cadbury were kind enough to answer .) Anyway, earlier today I started pondering what would happen if the Sorting Hat from the Harry Potter novels made a surprise visit to this blog, and decided to story the characters into some of my novels into the four Hogwarts Houses. Here is what I think the Sorting Hat would choose ... Cats, Scarves and Liars Peppa Grove ... HUFFLEPUFF! A good Hufflepuff is hard-working, loyal and friendly. Peppa is all of these, or at least she is when she's not grieving for her recently murdered husband. This is probably best demonstrated first through her attempts to save her failing marriage, and later through her choice to speak at her father's funeral, despite all of the terrible things that he had done. Behind the Scenes Catlin Ryan ... SYLTHERIN! Sylther
Post a Comment
Read more

In Two Minds is a detailed and sympathetic account of one man's journey through mental illness, written by renowned psychiatrist Gordon Parker. Martin Homer, known as Sunny to his friends, has a naturally cheerful disposition, despite suffering two great losses during his childhood. He has a good life. Martin is a medical practitioner working and living in Sydney's north shore. His marriage to Sarah is a happy one, though they are childless after a number of failed IVF attempts. However, the death of Martin's mother sends him into a deep depression, which then turns into a period of mania. During this period, Martin encounters Bella, a hurt woman with some pretty serious issues of her own. What happens next has far reaching consequences for them both ... Although this novel was a little slow in places, there is no doubt that it was written by someone who was an expert in treating mental illness. The author creates a sympathetic picture of Martin, even in the passag
Post a Comment
Read more

March 27, 2017
A post shared by Kathryn White (@kathrynsinbox) on Mar 7, 2017 at 8:17pm PST Welcome to a slightly revised format of Around Adelaide. As my Instagram Account seems to be getting bigger and better by the day, I thought that it would be fun to start sharing the best images on here. There will still be lots and lots of street art, and the pictures will remain proudly Adelaide centric, but the changes also mean that I can share some other great pictures here too. First up is a snap of this gorgeous coffee cup that I got from the food tent at Adelaide Writers' Week. Such a beautiful design and such a great idea to feature work by a local artist, instead of serving coffee from a plain cup, or one covered in advertising.
Post a Comment
Read more

Friday Funnies: I am not Buying Any More Books ...

Review: My Not So Perfect Life by Sophie Kinsella

Sophie Kinsella's latest novel offers a fun--and frivolous--take on the difficulties that many women in their early twenties face when trying to start out in the corporate world. Katie Brenner feels a bit insecure about the way her life has worked out. Sure, she's living in London and has a job at a prestigious marketing firm, but the commute to work is hell every day and she makes very little money for the hard work that she puts in. Worse still, her boss, Demeter, is a total nightmare. Demeter is cool, selfish and rarely recognises anyone else's efforts. Katie is eventually sacked (through no fault of her own,) and finds herself returning to her family home in the UK, where her father and stepmother have turned the old family farm into a successful camping business. And when Demeter arrives at the farm as a guest and does not even recognise her former employee, Katie seizes the opportunity to get revenge. But not everything is as it seems ... This one was a fun re
Post a Comment
Read more

I am sharing this one for to express my complete and udder, sorry, utter amazement that anyone would create a meme that features Clarabelle Cow. As far as Disney characters go, Clarabelle Cow is a fairly minor character. She was created by Walt Disney in 1928 and is friends with Mickey and Minnie, and is the occasional love interest of Horace Horsecollar, and less often the love interest of Goofy, thus proving that interspecies dating is not a big deal in the Disney universe. Clarabelle appeared as a minor character in a number of animated shorts during the 1930s, and these days appears as Goofy's love interest in the Mickey Mouse Clubhouse series. Surprisingly, Clarabelle is an extremely popular character in parts of Europe and appears regularly in the Italian Disney comics.
Post a Comment
Read more

Review: South of Forgiveness by Thordis Elva and Tom Stranger

When I sat down to watch Q&A one evening recently, I found myself utterly bewildered by the choice of one of the panellists. The thought that immediately ran through my mind was,  she's written a book about, WHAT? This was followed by other thoughts such as: Is this woman anywhere near as empowered as she thinks? What man put her up to this? Is this a sick joke? Is it even for real?  After all, there is something that is immediately confronting about the idea of a survivor of sexual violence collaborating on a book about forgiveness with the perpetrator of that very crime. I turned my thoughts off and listened Thordis Elva told her story--I believe that all stories of sexual violence should be listened to without judgement. Two days later, I was in the audience when Thordis and Tom spoke about their book at Adelaide Writers' Week. There was still much that I wanted to understand, so I did what I felt was the most honest thing that I could do--I walked to the booksh
Post a Comment
Read more

March 11, 2017
"I see that a man cannot give himself up to drinking without being miserable one-half his days and mad the other." The Tenant of Wildfell Hall  by  Anne Bronte
Post a Comment
Read more

Phrases: Sold Down the River

March 08, 2017
Sold Down the River:  To be Cheated or Betrayed Sold down the River is a phrase that means to be cheated, and/or betrayed. Many people know and use the phrase on a regular basis, however lesser known is the sad history behind the phrase. It originated in the United States during the days of the slave trade. To be sold down the river meant that a slave was sold from one of the northern slave states to a cotton plantation anywhere along the Mississippi River, where conditions were particularly brutal. Being sold down the river was akin to a death sentence.
Post a Comment
Read more 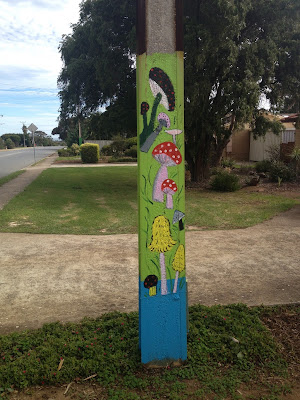 I snapped this beautifully decorated Stobie pole some time ago, somewhere in Christie Downs, possibly near Morton Road, a little while back. (Too much time has passed for me to remember the exact location, and it's not really an area that I visit often.) Anyway, I love the many varieties of toadstools in the painting and cannot help but wonder if there is a Smurf or two lurking around anywhere ...
Post a Comment
Read more 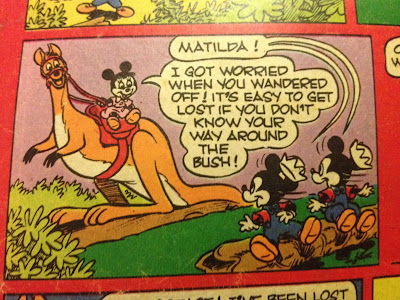 This never fails to crack me up--it's from a Mickey Mouse comic originally printed in the 1970s that tells the story of how Mickey travelled to Australia with his nephews Morty and Ferdie to visit some of their relatives down under. Apparently in Australia, it's easy to get lost (true) and the local mouse population ride uses kangaroos as their main mode of transportation (also true ... kidding!)
Post a Comment
Read more

Literary Quote of the Day

March 01, 2017
"He that is strucken blind cannot forget The precious treasure of his eyesight lost." Romeo and Juliet  by  William Shakespeare
Post a Comment
Read more
More posts