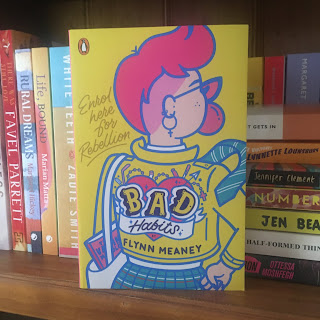 Alex Heck isn't exactly happy at her strict Catholic boarding school in Minnesota. A tough kid with pink hair and an attitude to match, Alex has been hoping to get expelled and away from the world of curfews, uniforms and the endless devotion to Hockey. After her latest attempt to get expelled backfires, Alex comes up with a plan that she feels is sure to work. She's going to stage the first ever performance of feminist play, The Vagina Monologues at St Mary's ...

This novel was, quite frankly, hilarious. Alex's attempts at shock and rebellion have some real laugh out loud moments, particularly as most of the time, the nuns and priests at her school don't seem all that shocked by her behaviour, and most of the other students have no clue about what she is doing. That said, we also see how she changes over the course of the semester, going from being an angry kid to one, who through her many failed attempts to get the play up and running, learns a lot about and from her fellow students, especially in that there is no one single or true way to be a feminist, and that the opinions and choices made by others around her are just as valid as her own.

This one is classified as YA and has teenage centric characters, however, much of it seems as though it is going to have a broad appeal with readers in their thirties--the ones who were in their high school years when The Vagina Monologues caused a stir in the late 1990s. However, teenagers who know the struggle of having their attempts to make a difference fall on deaf ears are sure to love some of Alex's exploits. I also loved the friendship of opposites between Alex and Mary Kate, and the gesture at the end of the novel that shows that Alex is a real friend, who truly cares about helping Mary Kate achieve her goals.

A fresh, funny read about a kid whose attempts to break free may just cause the unity she has been looking for all along.