Showing posts from February, 2013
Show All

Considering that I am not currently searching for Mr Darcy, or in fact, any man at the moment (I'm quite happily single thank you, and yes I do own a cat and no I don't think there is anything wrong with that,) buying a book which claims to be Jane Austen's guide to dating for the modern girl was a bit of a surprise purchase. But in all honesty, I did find Amanda Hooton's Austen-inspired dating advice to be readable, amusing and quite truthful. Unlike dating guides that encourage women to play hard to get ( The Rules ) or accept that all men are idiotic alpha types but don't worry eventually one day a man who takes a shine to you will come along and he'll happily hit you over the head and drag you back to his cave ( He's Just Not that Into You ,) this book encourages its readers to do what Jane Austen's heroine's did. And that is, to behave with a little self-respect and to be an all-round good and interesting person, which to me is far more import
Post a Comment
Read more

Announcing ... Behind the Scenes a new novel by Kathryn White 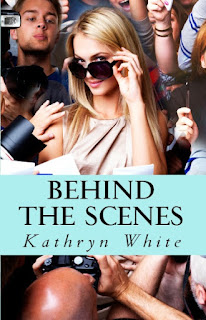 This April I will be launching a brand new novel. Behind the Scenes  fits perfectly into the New Adult genre and tells the story of Catlin Ryan, a young aspiring actress from the outer suburbs of Adelaide who lands a role on her favourite television series. Starring in the show means moving to Melbourne, where she becomes reacquainted with her long-lost Dad and sister and the discovery of some dark family secrets ... Behind the Scenes is one of my favourite stories, quite possibly because it is different from everything else that I have written so-far. As some of you may know, I've spent a good part of the last year pitching this one to various Australian based publishers and agents with varying degrees of success, but after a long talk with a good friend of mine, and taking note of M.M. Kin's self-publishing journey on facebook, I have decided to publish Behind the Scenes independently.   P.S. In coming weeks I will be looking for bloggers to review Behind the
4 comments
Read more

Wow, can it really be time for Feature and Follow Friday already? This has been a massive week for me, not only did I have a fantastic afternoon signing copies of Being Abigail  at Collins Booksellers Edwardstown , but you can all expect a big, book related announcement from me soon. Anyway, as I'm sure most of you know, Feature and Follow Friday is an awesome weekly meme hosted by Parajunkee and Alison Can Read designed to help like-minded bloggers connect. This week's all-important question is: Q: We always talk about books that WE want. Let's turn it on its head. What books have you given other people lately? Ooh, I love buying books for other people. I love thinking about what the other person might like to read and enjoy, and then there is always that bit of hope where I think that perhaps this book will end up being their favourite, or at least one of their favourites. The last book I bought for someone though was a Stephenie Alexander cookboo
25 comments
Read more

Time once again for Think Out Loud, a weekly meme hosted by the awesomeness that is Thinks Books . The purpose of Think Out Loud is for book bloggers to think outside the square and post about any topic they like. And so, this week, I am going to give the answer to a frequently asked question: Question: Are you lost? Answer: No, I am not. Despite the fact that people keep asking. The more insensitive the person, I have discovered, the more likely they are to ask. And then laugh, as though they have just said the funniest thing in the whole world. The thing is, I'm a bit of a deep thinker and a daydreamer. I'm quite happy to gaze into space for minutes on end while I contemplate anything from the meaning of life to whether or not grey is the most suitable colour for the carpet in the post office. (Personally, I think that navy blue would look quite spiffy against the backdrop of the red and white Australia Post logo. But then again, people who use words like spif
2 comments
Read more

Several months ago I committed myself to reviewing the books in Indigo Bloome's Avalon trilogy and here it is ... time for the final installment. And how to sum it up? Destined to Fly is by no means any less unbelievable than the first two books in the series, however, it is pleasing the see the author making use of her talent to write about something other than Dr Alex Blake's somewhat unusual (and that's putting it mildly,) sexual fetishes and adventures. In this installment, the plot veers off in an unexpected direction when Alex and her family go into hiding from the Xsade company who want more of her rare blood. While hiding in the Amazon, Alex finds herself on a spiritual journey that yields some surprising results.  Bloome is a talented author whose ability to write a suspenseful page turner is commendable. I enjoyed this series and the fact that it was not at all predictable and certainly not the Fifty Shades of Grey rip-off that I had envisioned when I
Post a Comment
Read more

Well. This review is going to be rather short and sweet, I'm afraid. That isn't because I didn't love the book, but because it is going to be very difficult to give this one a glowing review without completely ruining a couple of plot twists. Which I really don't want to do, on account of the fact that at least some of the people who will be reading this book are more than likely contemplating reading it for themselves and it would be just rude to totally spoil it for them. So ... Paper Chains is an interesting account of female friendship and two very unlikely friends who meet in London. Hannah and India are both Australians living in London. Both are running away from something, both have some pretty dark secrets that I don't want to ruin (but it's not what readers may be expecting,) and are a little bit on the lonely side. Their contrasting personalities compliment each other well--Hannah is quieter and in the process of punishing herself for what she
2 comments
Read more

February 13, 2013
Exciting news! Guess who will be appearing at Collins Booksellers Edwardstown on Friday 22 February to sign copies of her book? Mark this date and place in your diary, Adelaide, folks: Friday 22 February, 1pm Collins Booksellers Edwardstown Shop T54 Castle Plaza Shopping Centre,  Edwardstown SA 5039 Because I'll be there signing copies of my absolutely awesome novel Being Abigail. Seriously, I feel very honoured to have this opportunity to promote my work and even more so that the signing is taking place at one of my favourite bookstores. For those of you who don't know, I worked in the Castle Plaza Shopping Centre for almost four years--and used to visit the bookstore at least two or three times a week, either on my lunch break or after work. There were always some pretty awesome books to be found inside the store and they've hosted some very exciting author events as well. I never thought that I would be lucky enough to be one of those authors though
Post a Comment
Read more

Time again for Think Out Loud, an awesome weekly meme hosted by Thinks Books . The purpose of Think Out Loud is for book bloggers to think outside of the square and talk about things that they are interested in that may not necessarily be book related. And so this week I am going to be discussing something that I've wanted to write about for a long time. MBTI.  According to Jungian personality types, everyone has a preference for either Introversion or Extroversion. Introverts are the quiet ones, who need time alone to recharge and a smaller circle of friends to whom they are very close. Extroverts, on the other hand, are stimulated by people and the outside world. They are likely to surround themselves with a large number of people and hate to be alone. But once your preference for one or the other has been established, there are other preferences that become important in establishing ones personality. This is known as the Myer-Briggs Type Indictor, or MBTI. According
2 comments
Read more

Sharing this Peanuts comic simply because I think that Lucy is as awesome as she is awful. I love the character for her ability to put herself first, but hate her for her cruelty to others.
Post a Comment
Read more

February 07, 2013
Received an email this morning from Monica Leonelle, whose novel Socialpunk I reviewed on this blog mid-last year, informing me that she has rereleased her novel, with a better and extended ending. The novel, which is the first in a series, will be available free from the Amazon Kindle Store for the next little while. Check it out if you're interested in YA dystopian fiction.
Post a Comment
Read more

I am ashamed to admit, I've had this one sitting on my iPad for almost a month now, begging to be read. Mindful that the book was released on January 30 and my review is now late (grr, grumble, stupid belated quarter life crisis getting in the way of my review writing,) I pick it up and ... Well, there went the next few hours. Rough Diamond is, to be polite about it, simply brilliant. Sure, it's a Stephanie Plum/Bubbles style crime novel with a female protagonist who becomes an unlikely fighter against crime, but don't let that mislead you into thinking that its all been done before. This one is a lot more intelligent than its American counterparts and it is set in Melbourne. The novel itself tells the story of Erica, a divorcee in her early thirties who, though chance and circumstance, finds herself alined with a group who are bent on defeating a group of local terrorists who are planning some attacks. There are a few twists and turns and an unlikely love
2 comments
Read more
More posts