Showing posts from June, 2016
Show All

The Glittering Court  has a brilliant romantic, other-worldly concept that will no doubt appeal to female readers who are on the younger end of the YA spectrum. Our heroine is a well-brought up young lady who, since the death of her parents, has lived with her grandmother. The family fortunes are beginning to dry up and to help the family retain their respectable position within society, a match is made between our heroine and a young man who she is not in the least bit attracted to. Our heroine finds an escape in the unlikeliest places, trading places with a maid and running away to the Glittering Court, a place where impoverished young women are groomed in the ways of the rich and are shipped off as brides to men living in the new world. There, she changes her name to Adelaide and does her best to conceal her identity. And then, Adelaide does the one thing that she shouldn't, and falls in love, with a man whom she cannot marry ... This was a great idea, and a perfect blen
Post a Comment
Read more 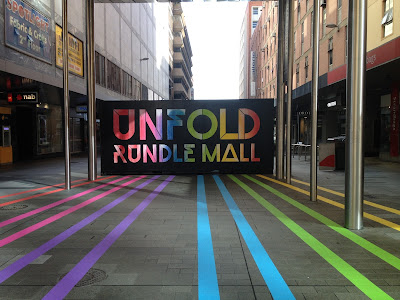 Unfold and ... behold! It's Rundle Mall in an explosion of colour! In recent times Unfold has been the advertising campaign for Rundle Mall, and a sea of bright colours can often be seen in various parts of the mall. This shot was taken at the stage near Gawler Place.
Post a Comment
Read more

On select Sundays I will be reviewing some of the old Apple Paperback titles from my childhood. These titles were published, or republished by Scholastic during the 1980s & 1990s and were written and set in the United States. In Australia, these books were typically only available from libraries or could be ordered through catalogues that were distributed through primary schools. Most of these titles are now long out of print or have been updated and republished for later generations ... Following on from my recent analysis of The Gymnasts series a couple of weeks ago, I found a cheap copy of one of the better books from the series at the Salvation Army Op Shop (this is an actual, local church-run shop, not to be confused with the larger and more commercial Salvos Stores,) for fifty cents and decided to bring it home. The book is a bit old and tatty and once belonged to the Inaburra High School Library, but it proved itself to be a fun nostalgia trip. Book six focuses o
Post a Comment
Read more

Off Topic: There is No Perfect Time For An Asthma Attack

June 25, 2016
As I have alluded to on this blog before, I am asthmatic. And not only am I asthmatic, but I am one of those asthmatics, the kind who can go without symptoms for weeks, or even months at at time, and then suddenly be hit with an almighty attack, the kind that may lead to a hospital visit, or even leave me housebound for days on end. (In late September/early October 2014, I was left housebound for a whopping eleven days. During this period, a book review that I wrote for Caroline Kepnes'  YOU  received a surprising amount of attention and I had to turn down the opportunity to go on television to talk about my reaction to the book. It's the only offer like it that I have ever received ... sigh.) Anyway, what most people do not realise about asthma is that attacks can happen any time, anywhere. In theory, this means that I could have an attack while doing something terribly important, or exciting, but the reality is, the vast majority of asthma attacks happen when I'm do
Post a Comment
Read more

Review: Lily and the Octopus by Steven Rowley

Thank you Lily and the Octopus for tugging at my heartstrings. You tugged, tugged hard and refused to let them go until the final page. In other words: This book made me cry, but I loved it very, very much. Lily is an ageing dachshund and a faithful companion to Ted, a single gay man who is in his early 40s. Ted and Lily have a great relationship and it is obvious that Lily means the world to Ted. (And vice versa.) But then an unwelcome visitor appears--an octopus, who attaches itself to Lily's head. And Ted finds himself doing everything in his power to defeat the octopus while it slowly and nastily tries to take Lily away. Anyone who has experienced the slow and excruciating loss of a loved one (whether that loved one has four legs or two,) will find Lily and the Octopus very easy to identify with. The use of metaphors is absolutely brilliant, as is the way that the author incorporates this clever literary technique with deceptively simple prose. The way that Ted deal
Post a Comment
Read more

Terry Prichard is the much loved assistant principal at a country primary school. Well-respected by the staff and parents and loved by his students, he has carved out a successful career which comes to a very sudden halt after the temporary appointment of a new school principal. Suddenly, Terry has retired, no one knows why and his replacement Nina is not having the easiest time settling in at the school, or into her new life as a single mother. And these are not the only characters who have their own story to tell in this new release by Australian author Suzanne Leal. There is also Rebecca, who arrives in Australia halfway through the year, Mel, a young mother and Laurie herself, a woman driven by rules ... and an agenda. I enjoyed reading this novel. In many ways, I found it reminiscent of The Slap by Christos Tsiolkas where every character has their own story and where blame is often a matter of perspective. The characters are flawed and make mistakes. Sometimes, though, Te
Post a Comment
Read more 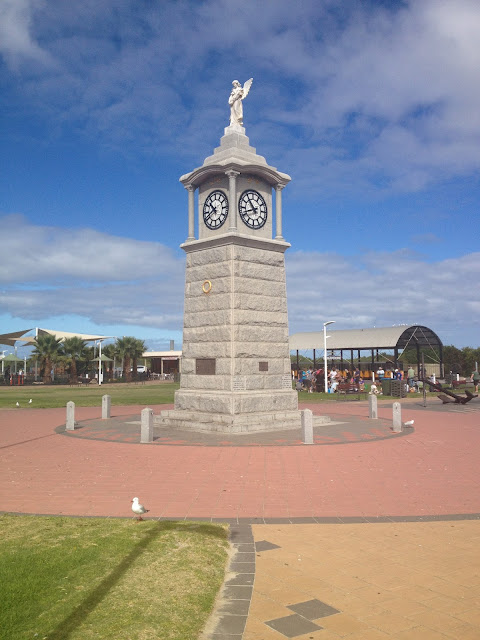 I know that I have shared this image before, but really is there anything that sums up Adelaide and its art better than this icon at Sempahore? Along with the Malls Balls, this is one of the few works of art in Adelaide that everyone and anyone can name accurately.
Post a Comment
Read more

Well, it's the 19th of June and as is traditional on this blog, I would like to take this opportunity to wish Garfield a very happy birthday! Looking forward to reading this year's birthday comic, and to many more laughs in the year to come.
Post a Comment
Read more

Australia's greatest earworm is undeniably this annoying, American influenced shampoo ad for a product that (so far as I know) is no longer even available.
Post a Comment
Read more

Every Simpsons fan knows of Ralph Wiggum, the special needs kid who is the son of the local police chief. Ralph is the character who interrupts the show with dialogue that is unintentionally funny. His teacher, Ms Hoover does not quite know what to do with him, the other kids in his class stay clear of him, and the rest of us get a good giggle from some of Ralph's classic lines, i.e. My cat's breath smells like cat food. Ralph debuted in the fourth season of the show, as a lonely kid in Lisa's class. She sent him a Valentine, because she felt sorry for him, Ralph took it the wrong way and developed a crush on her, leaving Lisa embarrassed and then angry, eventually breaking Ralph's heart. Later, Ralph wins the respect of Lisa and her classmates by proving himself to be a reasonably talented actor. In this episode, Ralph is perfectly intelligent, despite being socially awkward. In later episodes, the character developed into a kid who was dim, but eternally opt
Post a Comment
Read more 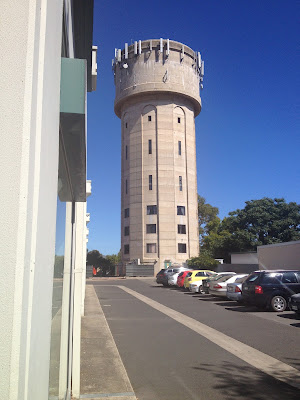 Not really street art this week, but an odd looking old building that I spotted at Norwood, near the eastern end of the parade ...
Post a Comment
Read more

On select Sundays I will be reviewing some of the old Apple Paperback titles from my childhood. These titles were published, or republished by Scholastic during the 1980s & 1990s and were written and set in the United States. In Australia, these books were typically only available from libraries or could be ordered through catalogues that were distributed through primary schools. Most of these titles are now long out of print or have been updated and republished for later generations ... I remember when I was about ten years old, being absolutely fascinated by this series of books by Elizabeth Levy about a group of amateur but aspiring gymnasts who were all aged between eight and thirteen and all went to the Evergreen Gymnast Academy. The series was a bit different from some of the others available, as the age range of the characters were pretty wide, and although the main characters always tried hard, they were never instant or automatic winners--in fact most of the kids w
Post a Comment
Read more

Well, it might be winter, but here is something to warm the hearts of Nostalgia fans. Who remembers these great Slip! Slop! Slap! ads that reminded us all to be sun smart during the 1980s?
Post a Comment
Read more

Deadly, Unna? hooked me almost immediately with it's realistic dialogue (so similar to how kids spoke when I was growing up in South Australia,) and sense of place. Gary Black is a fourteen year old kid just trying to survive life in the Port, a small South Australian town. Surviving means being one of eight kids, putting up with his father's wrath and doing anything to prove that he is not a gutless wonder (the worst possible thing that a teenage boy can be in his small town). This year, Gary is not only playing on the local football team, but he has been picked to play in the Grand Final. The football team is made up of a mix of boys, from the Port and from the Point, a nearby Aboriginal settlement. The team's best player is an Aboriginal boy called Dumby. Gary is terrified of Dumby at first, but the boys bond over unlikely circumstances and become good mates. However, after a grand final win, and seeing the way that Dumby is treated (he's overlooked for a trophy
Post a Comment
Read more 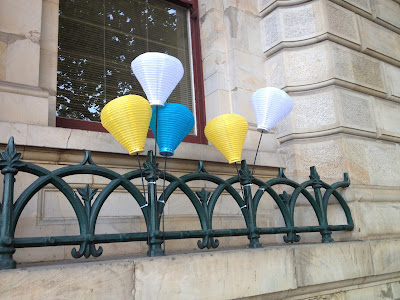 One night every year, these lanterns adorn the city--as part of the Light the Night walk, which goes to fund vital cancer research. This photograph was taken during the daytime, but at night you will see that they truly do light the night. The walk will happen again sometime later this year, probably in September or October.
Post a Comment
Read more

This advertisement comes from back in the days when there were only six different types of Arnotts Shapes and all of them were actually enjoyable to eat. It's disappointing that Arnotts felt the need to change the recipe of what was an beloved Australian icon, but these things happen, I suppose. Personally, I like the new Chedder ones, but the other new varieties are a write off for me.
Post a Comment
Read more

Today's Friday Funnies is dedicated to all of you who got to be a big toasty cinnamon bun this morning ...
Post a Comment
Read more
More posts