Showing posts from July, 2016
Show All

Australian actress/author Isla Fisher's latest novel is an outrageously imaginative and original tale for kids ... and any adult who cares to join in. And I'm sure that given Ms Fisher's status as a Hollywood actress there will be plenty of grown up fans who are willing to do just that. Well, there is that, and a bright and colourful cover that's oddly reminiscent to Roald Dahl. (Which, I freely admit, really sucked me in. But I am a little odd like that.) Marge in Charge is a hilarious tale of two ordinary kids who find themselves with one extraordinary babysitter. Told through the eyes of seven year old Jemima (who is the tallest girl in her class,) we experience the shock, and delight that Jemima and Jake experience when it turns out that their seemingly elderly and boring babysitter turns out to be a quirky member of royalty who has rainbow hair and a penchant for breaking rules and well, doing all the silly things that all kids would secretly like to do. (
Post a Comment
Read more

Off Topic: I said "Hello" not "Let's be Best Friends Forever!"

July 30, 2016
I am going to put aside the book chatter for a day and talk about something that really pisses me off. And that is egotistical, narcissist morons who mistake a friendly verbal greeting, given in passing, (such as a "hello") for intrusive interest in them and their personal life. To those people, I would like to say two things. The first thing is:  Get over yourself. I said, "Hello," not, "Will you be my best friend forever?" The second thing is: Fuck off. It pisses me off on a number of levels. If I say hello to someone, you know what it means? Hello. No. Really. It means that I've seen you, I know you from somewhere and I'm acknowledging your presence because that's the polite thing to do. It's not a licence for you to start behaving like an socially inept fuckhead who thinks that they had better brush me off straight away before I do something terrible like, I don't know, continue on with whatever the fuck it was I w
Post a Comment
Read more

In 1983, Canadian new wave band Men Without Hats wrote and released this song as a protest after their lead vocalist was kicked out of a nightclub because the bouncers didn't like the way he danced. And not only did they come up with one hell of an earworm (that still seems to be on high rotation on Mix 102.3) but they also came up with this absolutely charming clip that is all the better for the fact that it doesn't take itself terribly seriously. Random Trivia: This song is often falsely attributed to Australian band Men at Work.
Post a Comment
Read more

Review: Tales From the Scribe: A Collection by Tarran Jones

Tales From the Scribe by Adelaide author Tarran Jones moves at a fast, though strangely dreamlike pace where the imagery and setting can change in an instant--and it works. As a reader I could not help but find myself pulled into each of the stories whether they featured time travel, a post apocalyptic version of Australia or of a young woman contemplating--and doing--the unthinkable. Each story was just long enough to keep me interested and, at times, guessing. Recommended.
Post a Comment
Read more

Review: The Accident by Kate Hendrick

Sarah, Will and Eliat are three teens who are dealing with complex problems, who are all drawn together in one tragic moment, when they are all present at a fatal accident. The story is told across three different timelines--Eliat tells us of the time before, Will tells us what happened in the days afterward, and Sarah shares her experiences of what happens in the months afterward. All three teens are quite different, and all find their lives changed in some way. This book is a difficult one to review, because in some senses it is brilliant. The writing feels very real. The phrases and idioms used are very relatable. I like the overall moral to the story, that everyone has a story to tell, even if no one else can see it. The shifting narratives and trying to piece together how the three main characters related to one another proved to be challenging at times. That said, there is some clever symbolism at work here (mostly in relation to a drought and the possibility of rain,) an
Post a Comment
Read more 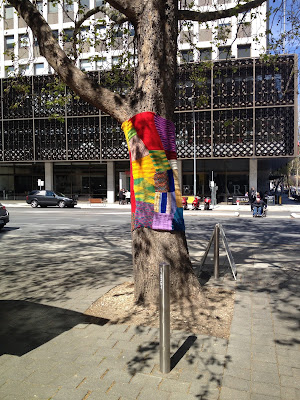 On select Sundays I will be reviewing some of the old Apple Paperback titles from my childhood. These titles were published, or republished by Scholastic during the 1980s & 1990s and were written and set in the United States. In Australia, these books were typically only available from libraries or could be ordered through catalogues that were distributed through primary schools. Most of these titles are now long out of print or have been updated and republished for later generations ... Bruno and Boots are a pair of best mates who attend a boarding school in Canada where they get up to all kinds of mischief, much to the ire of their headmaster Mr Sturgeon, aka The Fish, and much to the amusement of the delinquent girls who attend the neighbouring Miss Scrimmages Finishing School for girls. This Can't be Happening at MacDonald Hall is the first book in the series (not that it really matters,) and tells the story of how the best mates are sent to stay in different dormitor
Post a Comment
Read more

After being harassed by Frieda, Snoopy gets straight onto the case to chase some rabbits--his way. I love the visual gags in this comic strips. It is both illogical, and perfectly logical at the same time (after all, Frieda never said how Snoopy should track rabbits.) And the humour arises because, like Frieda, none of us are expecting to see Snoopy appear dressed as Sherlock Holmes.
Post a Comment
Read more

Review: The Factory by Paddy O'Reilly

Hilda is an Australian girl, incarcerated in a Japanese prison as she has been accused of murder. Bit by bit, she writes out her story--that of a university student who went to Japan to research the Koba, a mysterious, performing arts group (one that seems more like a cult than a theatre group,) who disbanded many years before when they were seemingly at their peak. Through her research (which includes a stay with the "new" Koba,) Hilda finds herself caught up in a web of complex stories, people and lies, and her research may come at a huge cost ... I enjoyed reading this unusual story of an Australian girl in a strange place, trying make sense of something that is, ultimately, difficult to comprehend and, perhaps, none of her business. Hilda's obsession with the Koba is both intriguing and tragic. The author has much to say about Japanese people and culture, and their relationship through both Hilda and her ratbag companion, Eloise. The final revelation at the en
Post a Comment
Read more

The ending to V.C. Andrews' third novel My Sweet Audrina was always tragically ambiguous. Audrina finally had the chance to leave Whitefern, the grand old mansion that had kept her prisoner since her ninth birthday, and at the last minute, she blew it, believing that a better future may be possible for her and her husband, Arden. This always left me speculating whether it was possible for Audrina to have a happy ending, or if she was indeed cursed to stay and suffer in the house that had kept her, and her memory, prisoner for so many years. Whitefern, the sequel to My Sweet Audrina , is set twelve years after that ending. Penned by long serving V.C. Andrews ghostwriter Andrew Neiderman, Whitefern offers one possible spin on what may have happened to My Sweet Audrina's tragic, titular heroine.  Whitefern opens with the passing of Damian Adare, Audrina's controlling father. A last minute change to his will leaves a fifty one percent share of his business to Audrin
Post a Comment
Read more 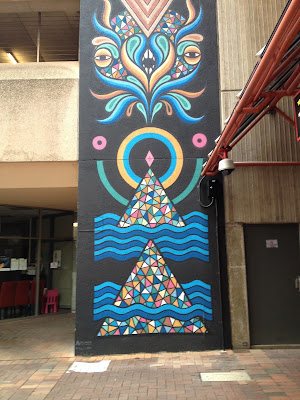 In between the dull, grey slabs of cement that make up Topham Mall (that little arcade that runs between Currie and Waymouth Streets,) are some truly quirky and colourful works of art. In recent times, Topham Mall has gone from being one of the ugliest and most run down arcades in Adelaide to something that is just as colourful as it is unique.
Post a Comment
Read more

The Note is a short, clever tale of what happens next after a one night stand. When Julie wakes, she expects to be alone. She also expects to find a note ... only this time there is none to be found. This was an enjoyable enough story about a young woman who goes about the morning after with the expectation that she is going to be let down, only she does not know how. The author provides a bit of a twist toward the end that works within the context of the story. Recommended.
Post a Comment
Read more

We had one of these posters in my primary school library in the late 1980s/early 1990s. I had forgotten all about it until I stumbled onto the image on google. I think it holds up pretty well.
Post a Comment
Read more

The Guest Cat is a short and deceptively simple tale of a married couple whose lives are changed when a neighbours cat begins to visit. The couple are in their thirties, their marriage has grown somewhat dull, but the presence of Chibi, a somewhat spirited feline, brightens their lives. The story itself is set in Japan in the late 1980s. This one has as little or as much meaning to it as the individual cares to add, but anyone who has owned a cat will be able to see something beautifully familiar in Chibi. Recommended.
Post a Comment
Read more 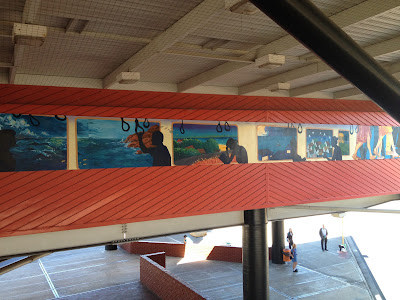 All aboard! This is one of several transport themed murals that decorate Noarlunga Interchange. Until 2014, the railway line only went as far as Noarlunga, and the outer southern suburbs were serviced by buses, making this one of Adelaide's busiest interchanges. These days, the train line runs all the way to Seaford, but Noarlunga Interchange remains quite busy, servicing many, many commuters each day.
Post a Comment
Read more

As far as conspiracy theories go, this one is pretty amusing. It's complete garbage of course, as one can find theories in anything, if they search far and wide, but it stands as a testimony to how things can look very different in retrospect--in this case, after September eleven, this image from The Simpson's takes on a very different meaning to what the animators originally intended during the mid-1990s when this episode was created.
Post a Comment
Read more
More posts