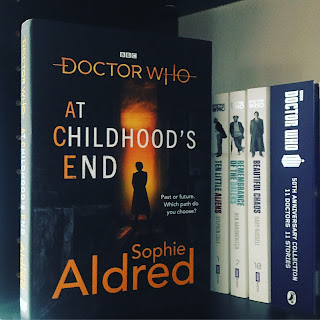 When I learned from a friend and fellow Whovian that Sophie Aldred, the actor who had played teenage rebel Ace, had recently penned a Doctor Who novel, I knew that I had to read it. Ace has always been one of my favourite companions, and the teaming of Ace and the Seventh Doctor (or Professor as she always called him,) was always a brilliant bit of casting. I share the opinion that the era of the Seventh Doctor was one of the finest and that many of the serials, especially Remembrance of the Daleks point to where the show was headed and sync in perfectly with the contemporary version of Doctor Who, which, as we all know has been going for an impressive sixteen years. Of course, it never should have been axed in the first place but ...

Anyway, At Childhood's End is another perfect link between the old and the new Doctor Who. Set in present day, we meet Ace, or Dorothy as she now prefers to be known, who is well and truly an adult and heads the global organisation, A Charitable Earth. (Ace, it turns out, did not part on good terms with the Doctor.) Anyway, Dorothy is being plagued by nightmares that all link back to when she first left earth after a supposed chemistry experiment went wrong. And there seems to be a surprising number of teenage runaways who are disappearing from earth. Is it possible that the two events are in some way connected? Let's just say, Dorothy thinks so. And then things take on another twist when she finds herself face to face with the Thirteenth Doctor, Yaz, Ryan and Gary. Together, and along with some other colourful characters, they find themselves on an action packed adventure as they try to get to the bottom of things.

I thoroughly enjoyed reading this one. Sophie Aldridge leverages her inside knowledge of the character she played to deliver a novel that is entertaining, intriguing and blends in perfectly with the current Doctor. For me, a good number of the Thirteenth Doctor's adventures have been a bit of a letdown, whether they be on television or in print, but this one is a lot of fun. And like a number of the best Doctor Who novels, this one seeks to explain some of the things we didn't see on screen.