Review: Welcome to the New World by Jake Halpern and Michael Sloan 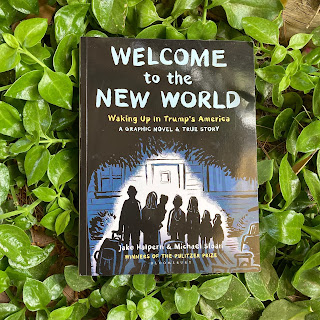 Beautifully illustrated and based on a true story, Welcome to the New World tells the story of a Syrian family who leave their old life behind to start anew in the United States. Life has not been easy for Naji or his family. War has devastated his home, and his father has spent time in jail. And now they are moving to a strange new land, where the people speak a different language and have different customs, but where they will be free to work and to get an education.

Life in the United States comes with many challenges. There are rules that the family must follow if they want to stay, some of them petty and unfair. The family has also arrived on the eve of the 2016 election and the political landscape has just shifted considerably. In addition to that, starting school and getting along with their neighbours, in a country where--it turns out--families like theirs are not always wanted or welcome isn't easy. But there are some lighthearted moments too, and moments of real joy.

Initially conceived as a short series of comics for a newspaper, those same strips won the Pulitzer Prize, and have now been expanded into this book. Although Welcome to the New World isn't always easy reading, it is most certainly eye opening and beautiful in its own way. People are people wherever you go. Some are good. Some are bad. Some get dealt a much worse hand than others. Some want to harm ... and some want to help, and to heal.