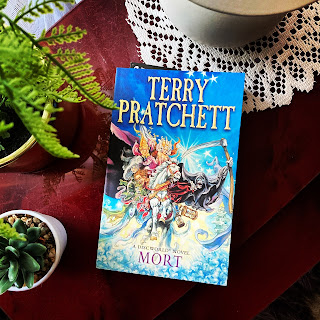 What happens when Death takes an apprentice? Utter mayhem, that's what. The forth novel in Sir Terry Pratchett's beloved Discworld series tells the story of Mort, a young man who isn't terribly well suited to the family business. A turn of events leads to Mort being taken on by Death--a character who is essentially the Discworld's Grim Reaper. And though his job might be morbid, it turns out that Death is a lovely, quirky character who has a genuine kindness about him. It's just a pity that Mort cannot get along with Ysabell, Death's adopted daughter. And that Mort has just foiled an assassination attempt on a princess, and now there are a number of consequences that the young apprentice was not expecting ...
Filled with clever dialogue and Pratchett's insight into human nature Mort is a cracking, humorous adventure about Death's young apprentice. I'm pretty sure that Death is now my favourite character. (Particularly now that I have learned just how much he likes cats.) In particular, I enjoyed the scenes where Death tried to become a little more human, there's something hilarious about the idea of him going out to a party and then taking up a kitchen job in a restaurant. There's also a lot to love about young Mort, who grows from being a fairly ordinary kid into a strong young man over the course of the novel, thanks in part to making a few mistakes, and being a part of the team who fixes them.
Although Mort is the fourth novel in the series, it would be an excellent place for readers to start if they have not read a Pratchett novel before, as this is, arguably, much better than the earlier novels featuring Rincwind, and is on parr with Equal Rites and Wyrd Sisters which are both excellent. The great thing about the Discworld novels is that they don't necessarily need to be read in chronological order to be enjoyed by readers.
Overall, an excellent read, one of Sir Terry Pratchett's best.
Highly recommended.
Mort Terry Pratchett