Review: Bridgerton When He Was Wicked by Julia Quinn 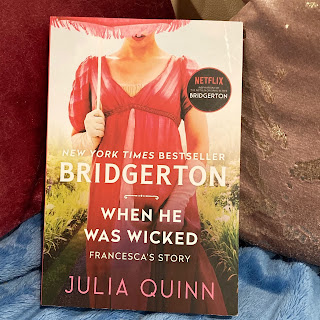 The sixth novel in the Bridgerton series turns its focus to Francesca, the sixth Bridgerton child and the third daughter. Until now, Francesca has been a very minor part of the series and something of an enigma. We know that she is about a year younger than Eloise and that at some point that she married an Earl and moved to Scotland. When He Was Wicked Tells her story, which is a little different to that of her siblings. Although Francesca's marriage is a happy one, it ends in tragedy when her beloved husband, John, passes away suddenly. A few weeks later, Francesca miscarries. Meanwhile, John's much-loved cousin, the wicked and rakish Michael, has inherited the title. Fortunately, he and Francesca get along well, and she considers him a good friend and confident. What she doesn't realise is that Michael has been in love with her since they first met--thirty-six hours before her wedding to John.

The difficulty with this one was that it had an interesting premise, and a lot of potential for lots of scenes of longing and forbidden romance. Instead, what we get is two twits who can't admit their feelings for one another, and the suggestion that none of their family or friends would disapprove if they were to marry anyway. Unlike in earlier Bridgerton novels there were no interesting twists. And Francesca's character does not ever feel fully formed. Michael, the reformed rake who unexpectedly becomes an Earl was the more interesting of the pair.

Overall, this wasn't the best book in the series, though it makes some admirable points about loyalty and personal happiness.

Julia Quinn When He Was Wicked