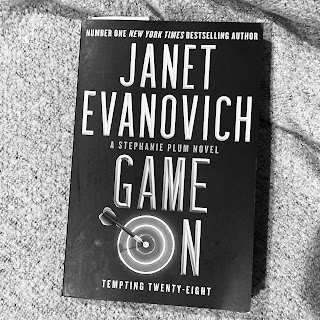 Bounty hunter Stephanie Plum is back in a brand new adventure as she tries to bring in the brilliant and very dangerous computer hacker Oswald Wednesday. Also searching for Oswald is the hunky Diesel whom she hasn't seen in more than two years, and who thinks nothing of taking up residence in Plum's apartment. Oh, and there is a bunch of amateur computer hackers who are calling themselves the Baked Potatoes who are getting killed off one by one, shortly after hacking in to Oswald's network, and now Plum needs to keep them safe.

I have to confess, it's been a very long time since I read a Stephanie Plum novel. I think the last one I read was Hot Six and even that was some time before I started keeping this blog. In any case, when I received a copy of this book in the post, I was pleasantly surprised to discover that the series was still around and that Janet Evanovich had written and enjoyed so much success. And even though there had been a few plot developments, the story was still easy to follow--mostly I think, because it uses a floating timeline, where although the era and technology change, the characters don't age nearly as fast. Many of the old favourites are here, along with Plum is her friend Lula, and her love interests Joe Morelli and Ranger. And, of course, Grandma is still causing trouble.

Full of unpredictable hijinks, this one is little bit fun, a little bit trashy and always entertaining.

Thank you to Simon and Schuster Australia for my copy of Game On: Tempting Twenty-Eight