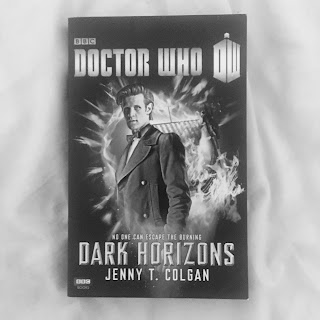 Vikings and alien fire come together in this rollicking adventure featuring the eleventh doctor. Penned by prolific British author Jenny T Colgan, this one starts slow, but gains momentum about halfway through and proves itself to be a Doctor Who adventure well worth sticking with.

On a lonely northern island, the locals have little to worry about, except for a viking attack. That is, until a viking ship that is carrying a princess who is on her way to a very much unwanted wedding, catches fire just off the coast of the island and the vikings and princess Freydis find themselves at the mercy of the locals. Fortunately for them, the Eleventh Doctor arrives just in time to broker peace between the two groups, especially as it is clear that they have a mutual and far greater enemy--alien fire.

This one travels down a typical Doctor Who path, combining history with an alien force who want only to find a new place to live, and a chance to exist, but that desire has a human cost. Added in is a dash of romance and a bit of fun. And that's basically it, but the whole thing is so entertaining that I couldn't help but love it. It was also nice to return to the Eleventh Doctor, and to a bygone era for the series (Dark Horizons was published in 2012,) especially as I have been disappointed with many of the episodes in recent years, and the wasted potential of the Thirteenth Doctor. But that is a discussion for another time.

Overall Dark Horizons is a bit of fun, suitable for any Doctor Who over the age of twelve who cares to join in, or possibly even as an introduction to the Doctor.