Review: The Graveyard Book written by Neil Gaiman and illustrated by Chris Riddell 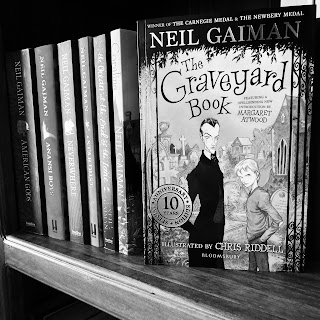 This is the best kind of children's book, the kind that can be read and enjoyed by readers of all ages. A little fun, a little scary and a little philosophical, The Graveyard Book tells the story of Nobody 'Bod' Owens, a boy who is raised in the graveyard after his parents and sister are brutally murdered by a man named Jack.

The novel opens with the murder of Bod's family, the toddler's escape to the graveyard and the promise that the occupants of the graveyard make to his mother before she is spirited away that they will love him, raise him and care for him. But a childhood in a graveyard is a very unusual thing, and Bod will find himself experiencing many adventures, some frightening, some sad and all of them shaping him in one important way or another. Chris Riddell's brilliant, detailed illustrations at the start of each chapter give an additional level of depth and, dare is say it, spookiness to the story.

The Graveyard Book is an entertaining book at every twist and turn. The author gets the perfect balance between terror and joy, and tells the story of a childhood that though it is exceptionally unusual, it immediately feels familiar. There are strong themes of family, belonging and friendship, along with an account of schoolyard bullying that is dealt with in the most enjoyable of ways. The second to last chapter is deliciously frightening. It is not at all difficult to see why this novel won both the Carnegie Medal, and the Newberry Medal.