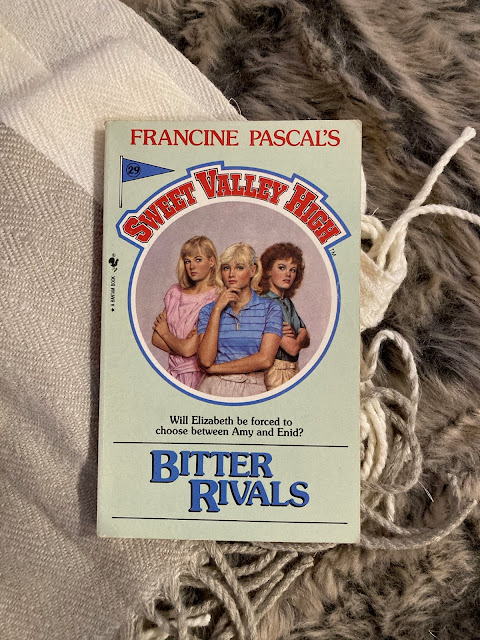 Sweet Valley High #29
Bitter Rivals
Bitter Rivals was released shortly after the Sweet Valley Twins series debuted. It's main purpose is to create a link between the two series. In Sweet Valley High, Elizabeth's bestie is Enid Rollins a quiet nerdy kid with a dark past. Or dark for the saccharine world of Sweet Valley anyway, where things like recreational drug use always have fire and brimstone consequences. Anyway, Enid's life before moving to Sweet Valley was a little bit like that of the narrator in Go Ask Alice, but a tragic event that cost an innocent kid their life caused Enid to reform. At Sweet Valley High she meets Elizabeth in a creative writing class and the pair become firm friends, which annoys Jessica, who thinks her sister could do better socially. She's probably not wrong, given that Enid spent most of her junior year being the most boring character in the entire series, and then in every later series she jilts Elizabeth at every given opportunity. Perhaps Jessica really was just looking out for her sister.
The fact that Enid didn't arrive in Sweet Valley until tenth grade, means that a new best friend had to be created for Elizabeth in Sweet Valley Twins. Enter Amy Sutton, a tomboyish, athletic kid who also works with Elizabeth on the school newspaper. (She also appears at age seven in Sweet Valley Kids.) Anyway, Amy's departure from Sweet Valley is explained that at the end of sixth grade, her mother, a sports journalist, gets a promotion and the whole family has to move to the other side of the country.
And then ... well the two have to meet, don't they?
Sweet Valley Twins had only been around a short while when Amy entered the Sweet Valley High series in book 29. At first, Enid is jealous of Amy, and Amy considers Enid to be quite bland--as most of the characters do. Anyway, Elizabeth hangs out with Amy for a bit, in spite of the fact that the two no longer have much in common. Eventually, Amy starts spending more time with Jessica, while Elizabeth acknowledges that she and Amy have grown apart. Throughout most of Sweet Valley High Amy would appear sporadically, and was portrayed as being quite immature for her age. Eventually though, Amy starts to grow up and finds her niche as a telephone counsellor on a youth help line.
As for Enid, she continues to appear throughout the series. She takes on multiple personas in different series, most of which seem to be for shock value, rather than offering any kind of useful plot points or redeeming messages. In Senior Year, she becomes a goth and slowly starts to grow apart from Elizabeth. In Sweet Valley University, Enid reinvents herself as Alex, a party girl who likes a drink, and whose previous problems with addiction take a turn for the worst. Finally, in Sweet Valley Confidential and it's sequel series The Sweet Life, Enid is portrayed as arrogant and an aspiring politician with strong right wing values.
Francine Pascal Greetings From the Unicorner Random Sweet Valley Pic