The Baby-Sitters Club Netflix Series is Here! And it's Brilliant! 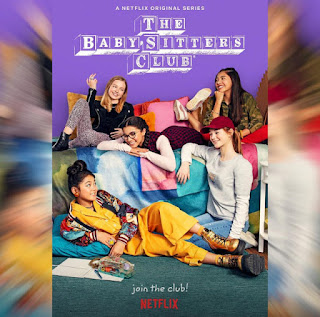 One of the biggest surprises to come out of 2020 (well, you know, apart from a global pandemic,) is that iconic children's book series, The Baby-Sitters Club has been reinvented as a Netflix original series. From the moment that I discovered the series was going to be a thing, I was worried. How could they possibly make certain iconic parts of the series relevant for the target audience in 2020? I mean, come on. No one uses landlines anymore. And some books, such as Claudia and the Phantom Phone Calls are pretty dated.
Then I started hearing bits and pieces about the show that started to make me think that maybe, just maybe the people behind it really knew what they were doing. From the moment that it was announced that Alicia Silverstone was cast in the role of Elizabeth Thomas (aka Kristy's mum,) and Mark Feuerstein as Watson Brewer, it was clear that the producers might just be finding a way to create a series that was relevant to contemporary viewers. And then the casting news kept on coming. A surprise, though in the most pleasant of ways, was the way an extra touch of diversity was added to the group. Instead of being the stereotypical California blonde from the novels, Dawn was to be Latinx. Her parents had divorced and her dad was now living with another man. And the most surprising thing was, when I thought about it, nothing about the changers altered the character. Dawn was still a girl moving to the opposite side of the country with her mother halfway through the school year, who had a strong sense of individuality.
Then there was Mary Anne. Something about her character being mixed race and raised by her socially awkward white father was a perfect fit for a character who was, arguably, the most complex of the girls.
But was this enough for the series to be a hit?
The series hit Netflix a couple of weeks ago. A little excited, a little nervous I watched the first episode. And it was brilliant. From the opening scenes, where Kristy complains that the punishment given to her by her school teacher--to write an essay on decorum--would never have been given to a male student--it was clear that this series was going to have girl power on full throttle. From there, I watched as modern day blended with some of the most iconic elements of the book. In fact, Kristy's whole idea of using a landline for the club, and having set times when customers can call, is inspired by watching her mother endlessly trying to find a babysitter online for her little brother. And then we get to see the actual phone--a 1990s style 'clear' phone that Claudia purchases from Etsy because it is 'iconic.' As it is. In the best kind of way.
The individual episodes are taken from the early books, though they have a thoroughly modern spin. (I laughed when I found out who the phantom phone caller was.) Each girl has her own struggles. Kristy's dad walked out on the family and she isn't too sure about her mother's new fiance, wealthy Watson Brewer. Claudia struggles academically and finds herself at odds with her parents. The sibling rivalry between Claudia and her older sister, super smart Janine, is portrayed realistically. And her relationship with Mimi is just as lovely as in the books. Meanwhile, Stacey keeps her diabetes a secret from her friends at the urging of her parents ... until she learns talk about it her way. And then there is shy Mary Anne, who struggles against her father and his suffocating rules (portrayed brilliantly by Marc Evan Jackson,) until she eventually finds her voice ... after standing up for a transgender child who she is caring for. And then along comes Dawn, the most confident of all the girls, who ends up leading a mass protest at summer camp. Oh and [[[spoiler alert]]] Dawn aunt is none other than Morbidda Destiny! And yes, there is a budding romance between Dawn's free spirited mother and Mary Anne's uptight father.
Diversity is subtly threaded throughout the show with a number of minor characters, without it being shown as a big deal. The writers are less kind, however, to Kristy's older brothers Sam and Charlie, portraying both as immature, selfish and more than a little insensitive. Even Watson is show to initially be dismissive of the club, asking if it is a place where girls go to learn about baby-sitting, though his attitude changes when Kristy explains her business plan.
Overall, the series is well written and uplifting, and offers an almost wholly positive message for the target audience. The young actors bring a surprising amount of maturity to their roles, though not so much that they are completely unbelievable as twelve year olds. There's also just enough nostalgia to keep older fans happy, whether they are watching it with their own daughters or nieces, or if they want to watch a few episodes just for old times sake.
PS Keep an eye out for two other iconic characters from the series in the final two episodes!