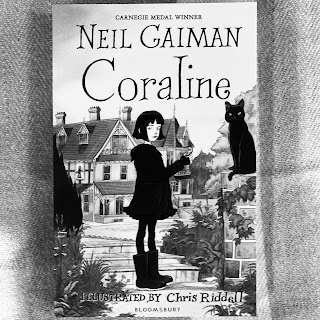 Coraline is a novel that is as delightful as it is scary. Featuring a young protagonist, but with a plot more suitable for readers at the higher end of the age range for middle grade, it tells the story of Coraline, an only child who has recently moved to a new flat with her parents. Both of her parents are busy and the other residents are as old as they are odd, so Coraline finds herself feeling quite lonely. She takes it upon herself to explore the building--a former grand old manor that has been converted into flats. And on the other side of a door she finds two people with big, scary black buttons for eyes who claim to be her "other parents." The other mother wants her to stay there forever, and begins a deadly game where traps are set, and Coraline knows that she must fight to go back home ...
This was a twist, scary gothic novel with a big heart and a hell of a lot of imagination. I enjoyed the sense of not knowing what would happen next, while I wished Coraline all the best as she went about trying to fix the many wrongs created by the other mother. In particular, I enjoyed how Coraline resolved things at the well. The character is portrayed as being clever and independent and possessing a true sense of right and wrong, one that she does not necessarily know that she has at the beginning of the novel. It's also very much a story about loneliness. Coraline is an only child who has just moved to a new home, and is about to start at a new school. Meanwhile, the other mother faces a similar sense of loneliness, through her intense desire for a child and to be well, a part of something, I suppose. The buttons, as well as being scary, point also to her obliviousness to the wrongs of the situation.
Overall, Coraline well written and an enjoyable read, and one that can very much be enjoyed by readers who are outside of the target audience. (Yes. I am talking to you. You are most definitely not too old, too mature or too sophisticated to read this book. Or if you are, I do not want to know you.)
Highly recommended.
Chris Riddell Neil Gaiman