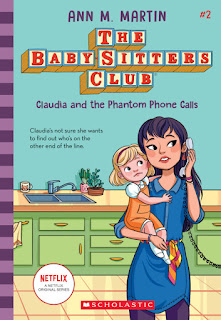 After having such a great time reading and reviewing Kristy's Great Idea, I just couldn't resist picking up the second book in the Baby-Sitters Club series, Claudia and the Phantom Phone Calls. Then, just as I found myself opening the book, I hesitated. Was this really such a good idea? Was it even really a good idea of Scholastic to reprint and reissue the book? After all, there is a good reason the title was skipped when the series was reimagined as graphic novels.
The concept is awfully dated.
In this volume, there is a burglar targeting houses in neighbouring towns, who the police have dubbed The Phantom. (I wonder if Lee Falk considered suing over this?) The Phantom's MO is simple, they phone the house they plan to burgle. If someone answers the phone, The Phantom knows that they are home. If no one answers the phone, The Phantom knows that they can break inside the home without being caught. It's a crude technique, but it was one that was indeed quite effective in the days before caller ID and when every house had a landline. It's also an easy concept to explain in a children's book. Anyway, the Baby-Sitters are worried that the Phantom may consider targeting a home where this a babysitter present. Their fears aren't exactly unwarranted--both Claudia and Kristy have received calls similar to the ones made by The Phantom while they've been on various babysitting jobs. Anyway, as the story goes on, various strategies are put into place. And then two very scary things happen. First, Claudia's neighbours, the Goldmans, are targeted by a burglar who uses a similar strategy to The Phantom. And then, while Claudia and Kristy are babysitting in the evening, they start to get an alarming number of calls. And then, they hear someone outside ...
Obviously, this one was written in the 1980s, when phone technology was a little different, though that could easily be explained away by The Phantom blocking his or her number. However, that's not the only part of the book that dates. Badly. It turns out [[[spoiler alert]]] that in the cases of Claudia and Kristy, the callers are two boys from their school who have crushes. One, the chronically annoying Alan Gray, also happens to be the prowler outside. You see, it turns out that he didn't know how else to get Kristy's attention so he took to stalking her. And then he asks her to go with him to the Halloween Hop and Kristy, an otherwise strong and feisty, feminist, smiles and says yes. The moral to the story? The meaner a guy is to a girl, the more he likes her. And the baby-sitters are cool with this, and that being a jerk and stalking people is basically considered a good thing. And okay, I know this was written over thirty-five years ago, but bloody hell Ann M Martin. You inspired and empowered generations of girls. And then it turns out you did this. I'm disappointed.
Although I enjoyed some of the ways the baby-sitters worked to keep themselves safe (Mary-Anne's home burglar alarm system was a real highlight,) this one is let down by a silly, sexist message. Let's home the TV series reimagines this one in a more positive light.
Random Trivia: The toddler on the front cover is none other than Hollywood actor Kirsten Dunst.
Ann M. Martin