Review: The Other Passenger by Louise Candlish 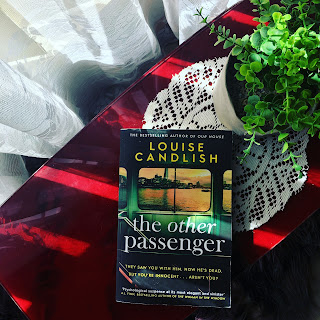 There is an eerie sense of claustrophobia almost from page one in The Other Passenger, the latest twisty thriller from British author Louise Candlish. It is the day after the Christmas break and Jamie has just boarded the river bus, the boat that takes him on his daily commute to work. Middle aged Jamie is keen to see Kit, his cool, charismatic and younger travel companion, but today, Jamie is nowhere to be seen on the boat. His other travel companion refuses to talk to him. Then two police officers board the boat. Kit has been reported missing. The last person to see him was Jamie. And another passenger has claimed to have seen the two men arguing. But Jamie didn't harm Kit ... did he?
The novel zigzags between the past year and the present, telling the story of the friendship between Jamie and Kit, and their partners Claire and Melia. There are plenty of deceptions, undercurrents and quiet frankly, none of are terribly nice people. However, the biggest divide between them all is the generation gap. There is resentment on both sides, Jamie and Claire resenting the younger pair for their youth, while Kit and Melia resent Jamie and Claire for have a home and lifestyle that is utterly unobtainable for people of their generation.
But does any of that make Jamie a killer?
Although this book had an interesting premise, I found that the storytelling was let down by a main character that I felt absolutely no compassion for and a situation that soon lost its creepy "it could happen to anyone" vibe and soon began to border on the ridiculous. Overall, this was a disappointing read for me, though there were a couple of interesting twists.
Thank you to Simon and Schuster Australia for my ARC of The Other Passenger.