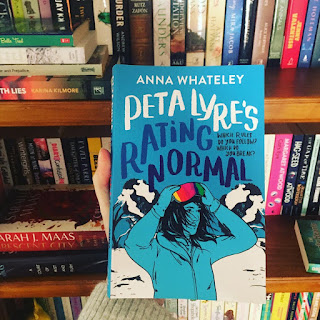 Peta Lyre is a teenage living in a world that just isn't designed for the way her mind works. She's on the autism spectrum, has ADHD and SPD. She's academically gifted, but she doesn't always do well at school. And she's also the main character of this very awesome book about first loves and self-acceptance. Peta is aware that she's not the same as a "typical" teenager, but she follows the advice of her therapist that will help her fit in. And since she moved in with her aunt, and away from her fighting parents and her mother who does not--and will not try--to understand her, life has been getting better. At her new school, she can be with her best friend Jeb, a savvy streetwise kid whose home life is far from ideal. And she's found a friend in the new girl--Sam. Their friendship blossoms in a surprising, but wonderful way, on a school skiing trip.
Then things start to fall apart and Peta needs to decide whether the rules that she has been living by really matter.
This was a charming own voices read written with a whole lot of heart and understanding for the main character. Adolescence is a tough time, and its even tougher for someone who has to stop and think about whether following their natural impulses is okay, or if it will just cause them more trouble. It gave me a real appreciation for the way that people feel the need to mask themselves in public, to deny their sense of self in the hope of being considered socially acceptable. The ratings that Peta gave herself broke my heart a little, but something about it also made the story feel very real.
Highly recommended
This book was read for the Aussie Author Challenge 2020
Anna Whateley Peta Lyre's Rating Normal