Review: A Court of Thorns and Roses by Sarah J Maas 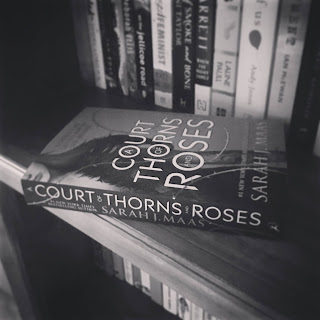 A Court of Thorns and Roses has certainly gained a lot of attention since it was published in 2015 and it is not difficult to see why. There are certainly some dark--and sexy--themes in this supposedly YA level fantasy novel.
Feyre is the youngest of three daughters and somewhat neglected by her father and sisters. Despite their indifferences, she fine turns her skills as a hunter so that she may keep her poor and starving family fed. On a hunt one day, she kills a massive wolf. Soon after a creature appears at her door, declaring her a murderer. And to pay for the life that she has taken, she must follow him into the neighbouring lands, where she will be his prisoner. Only being a prisoner amongst some beautiful, magical and cursed fae doesn't quite involve what Feyre expects because ... yes, you guessed it, this is a retelling of beauty and the beast.
This one is a light, guilty pleasure read that gives the reader everything that is promised on the cover. Feyre makes for an interesting heroine, a human girl whose imprisonment isn't quite what she expects. I wasn't quite sure what to make of her beast, the brooding Tamlin whose very survival relies on Feyre, yet he isn't exactly forthcoming on the details. Initially, it appeared that a love triangle may have developed with Feyre torn between Tamlin and Lucien, but from the moment that sexy bad boy Rhysand appeared on the scene, it was obvious that Tamlin was going to have a very different rival instead.
Overall, this is a bit of entertaining escapism, though I would be hesitant to hand it to a younger teenager, in part because of the heavy sexual content, but mostly because for a book that has themes of true love, it certainly sends some mixed messages about what love and what a healthy relationship looks like. So not great for young and impressionable teens, but for older teens who know the score and are looking for a bit of escapism, this one is fine.
Recommended.
Sarah J Maas