Review: The Swap by Robyn Harding 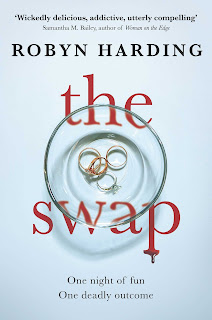 The Swap is a wicked, scandalous page-turner about one night, a very nasty woman playing a dangerous game and a lonely teenager intent on revenge.
Low Morrison is a lonely kid in her final year of high school. Life on an isolated island with her hippy, polygamist parents has left her bereft of the usual teenage experiences and consequently, she is struggling to find not only her place in the world, but an ability to form meaningful relationships with others. That all begins to change when she encounters the glamorous and worldly Freya, a former small time actress who is married to a former hockey player. The lives of Freya and Maxime have more or less been ruined by a massive scandal that has played out openly in the media. but to Low, Freya is nothing but wonderful and exciting. Then along comes Jamie, a woman who has moved to the island with her husband, an English teacher turned author. The adults all have a lot more in common and Low is soon ditched. And that is where the story should end, right?
Wrong.
At a drug fuelled party for four Freya comes out with a surprising suggestion. One that everyone concerned will regret and brush off afterward. Until it turns out that Low knows everything.
And that Freya is playing a very different, and deadly, game ...
This was quite a page turner, filled with situations that just seemed to get stranger and stranger with every twist. Freya is a deadly psychopath, the kind of villain that readers will love to hate, while simultaneously feeling sorry for Jamie and Low. (And maybe just hating them a little for being so stupid.) I found myself reading this one over the course of a raining afternoon and I was both shocked and entertained by a lot of the crazy hijinks. I do not envy any of the characters in this book, but they were most certainly a lot of fun to read about.
Recommended.
Thank you to Simon and Schuster Australia for my ARC of The Swap.
Robyn Harding The Swap