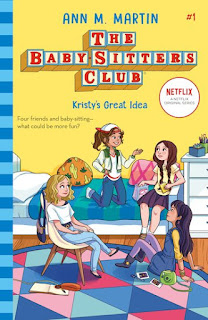 With the new Baby-Sitters Club TV series making its debut on Netflix this week and with the first six Baby-Sitters Club books being released with some fun and pretty new covers, I just couldn't resist re-reading this one and adding a review on here. Kristy's Great Idea is, obviously the book that kicked off the series. Originally intended as a four book miniseries, it tells the story of how Kristy Thomas comes up with the idea of setting up a baby-sitting business after her mother struggles to find a baby-sitter for her younger brother, David Michael. She rounds up three very different girls, cool and creative Claudia Kishi, who lives across the street and provides not only the venue, but the phone line for the club, Claudia's new friend, cool girl Stacey McGill, who has recently moved to the small town of Stoneybrook from New York and shy and quiet Mary Anne, who lives alone with her strict father in the house next door to Kristy. From there, the reader is treated to a number of misadventures that all four club members experience on their first baby-sitting jobs--including how Kristy is tricked into looking after two very boisterous dogs. There is also a glimpse into the private lives of each of the girls, all of whom have their problems. Stacey has a secret from the other girls, and it has a lot to do with the real reason she left New York. Claudia is smart, but in a creative way and often struggles at school, in contrast to her extremely intelligent but boorish older sister. Mary Anne is struggling not only to overcome her shyness, but to stand up to her over-protective father. And, as for Kristy, well she's struggling to accept her mother's new relationship with a man named Watson. She has a good reason--after all, her own father let the family down in the worst possible way, and her mother has worked very hard to look after four kids and hold down a full time job. Why risk inviting someone else in to the family and losing everything that they have worked so hard for? Then again, what if Watson really is the dad that Kristy and her brothers needed all along?
This was a fun nostalgia trip. I remembered most of the story--after all, I read it several times between the ages of nine and thirteen--but I found myself surprised on a number of occasions just how well written the story was. Ann M Martin handles the conflict between Kristy and Watson well, treating the protagonists feelings as though they are valid, while showing that perhaps she is being too harsh. The resolution is, of course, lovely. And, as is the trademark of the series, the problems experienced by the main characters are usually resolved by, or between, themselves with little intervention by the adults, though characters like Elizabeth and Watson, and Claudia's grandmother, Mimi, offer support.
Anyway, this is a great read for kids in their middle and upper years of primary school. I know that the television series will have a bit more of a contemporary feel--and the changes are more than cool with me*--but I hope that viewers will be inspired to pick up the books and see where it all began.
Highly recommended.
Ann M Martin Baby-Sitters Club Kristy's Great Idea