Review: The Colour of Magic by Terry Pratchett 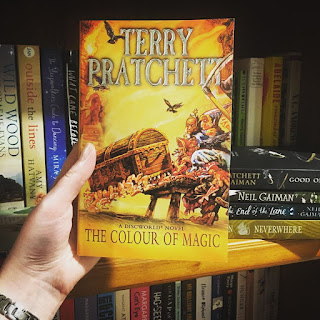 What do you get if you combine a world that's shaped like a disc and carried on the back of a giant turtle, a spectacularly incompetent wizard, Death, the world's first tourist and a piece of luggage that is made entirely out of wood and carries itself with its multiple pairs of legs?
Why, Terry Pratchett's first Discworld novel of course!
A spectacular work of humour and imagination, this one tells the story of Twoflower, Discworld's very first tourist and Rincewind, a wizard who did not pass his exams and who is now tasked with guiding Twoflower through a number of magical and very dangerous lands. There is plenty of laughs and surprising twists and turns to be had in this one as the pair try very hard to outwit Death (think, the grim reaper,) as he tries so very hard to claim Rincewind. Divided into four seconds that are roughly eighty pages long, the pair navigate various lands, meeting a number of strange people along the way, until they very nearly fall off the edge of the disc itself.
This one is highly entertaining, though perhaps not Pratchett's best. Obviously, this is the first in what become a much loved series of forty books written over a great many years, so various tropes and characters that are familiar to fans do not appear within. And, as is often the case with Pratchett, some sections do have to be read twice in order for the reader to feel their full comic impact. Overall, a unique read.
Recommended.
Terry Pratchett