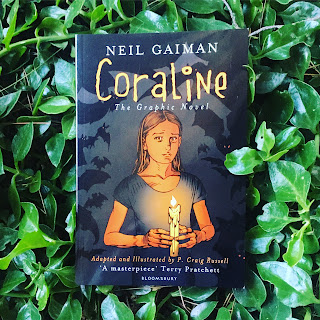 Coraline gets a spooky retelling in this beautifully (yet fittingly eerie,) graphic novel. For those who came in late, Coraline is the story of a girl who moves to a once grand mansion that has been divided into flats with her parents. It's the summer holidays, and bored, Coraline takes to exploring the flat. But nothing and no one is terribly exciting, especially not her old and eccentric neighbours. But then Coraline finds a mysterious door. On the other side is a woman who looks just like her mother, except that she has buttons for eyes. And she goes to some pretty nasty lengths to try and claim Coraline for her own.
I was truly amazed by just how well Neil Gaiman's gothic novel Coraline translates as a graphic novel. There's something eerie, and so, so fitting about P Craig Russell's illustrations. Everything, from the Other Mother to Coraline's initial boredom inside her new flat is perfectly told and illustrated. In fact, I'm going to come out and say it. The graphic novel is actually better than the original. And the original was good. Everything about this version is clever and oh so very atmospheric.
Highly recommended.
Neil Gaiman P Craig Russell