V.C. Andrews Ruby to be Made into a Lifetime Film 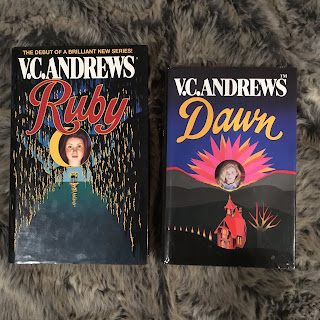 For months now, there have been hints over on the official V.C. Andrews Fan Page on facebook that there will be some big things happening in the V.C. Andrews fandom in 2020. And then, last weekend, a huge announcement dropped, with news revealed that Lifetime will be developing Ruby and its three sequels and prequel into a series of five telemovies.

News of a Ruby/Landry series making its way to the small screen isn't exactly news. Rumours of a possible Ruby TV series titled The Landry have been circulating since about 2007, and for a time, IMDB even had a page dedicated to the series. The Complete V.C. Andrews website (the most detailed VCA fansite on the web,) notes that there was still talk of a series recently as 2016. The page also details that at one time or another pitches had been made to Netflix and Warner Bros and, surprisingly, Lifetime previously showed interest in Ruby as a limited series. (Read more here.)

So why should this news be any different?

Well, for a start it has been confirmed. And not only has Lifetime given the project the green light, but the roles of Ruby and that of her wicked twin sister Gisselle have been cast--the pair will be played by twins, Australian actors Raechelle and Karina Banno. (Some of you may remember Raechelle Banno from her stint as wild-child Olivia in Home and Away.) Production on the first of the films (presumably Ruby,) will begin later this month.

Lifetime has a huge history of turning V.C. Andrews books into TV movies with uneven results. Starting with Flowers in the Attic in 2014, which gained some praise from fans for remaining truer to the books than the 1987 film, the network then went on to make movies out of the next three novels in the series, which was then followed in 2016 by a TV movie of My Sweet Audrina that left out a number of key characters from the book, most notably Sylvia, Audrina's youngest sister whose intellectual disability keeps Audrina tied to the house, and Billie, Arden's mother who is cruelly seduced by Audrina's father.

And then in 2019 Lifetime released the Casteel series. Criticised by fans for their not unwarranted concerns about the change in Heaven's hair colour (a key element in the book, as Heaven believes her dark hair to be cursed, yet the real trouble happens when she dyes it blonde,) the films proved popular enough with viewers to be considered a ratings success. In Australia, the films made it to free to air television (they were aired as a series of midday movies on Channel 7, the same network that, perhaps not so coincidentally makes and broadcasts Home and Away.) This is noteworthy in itself, as previous Lifetime VCA films have only been broadcast on Foxtel. In Australia, the films were rushed onto DVD as a box set and, surprisingly, were released months ahead of the planned DVD releases in the United States. They're also still available to view on 7 Plus. Back in the United States, they have been replayed on Lifetime on multiple occasions.

As for Ruby and its sequels, they may very well make interesting TV movies. The books were the second series to be completed in their entirety by VCA ghostwriter Andrew Neiderman, and while sitting squarely in the realm of a trashy, guilty pleasure read, they are also considered to be his best among fans. Well researched, with plenty of references to Voodoo and a surprisingly accurate account of the Louisiana court system, Ruby tells the story of a teenage girl who lives with her impoverished grandparents in the swamps of Louisiana in the early 1960s who discovers that not only is her potential boyfriend her half-brother, but she also has an identical twin sister who lives in New Orleans with their father and his wife (who he was married to whilst embarking on an affair with Ruby's mother.) Following the death of her grandmother, Ruby flees her drunken grandfather after he tries to sell her, and travels to New Orleans to meet with her long lost father and twin. From there, multiple twists and turns develop, from stolen boyfriends, teenage pregnancies, incest, a voodoo curse that lands Gisselle in a wheelchair and a daring escape from a mental hospital after Ruby's wicked stepmother tries to have her committed. And that's all just in the first two books. The whole thing is gloriously soap like, and has an addictive trashy quality that if done well, will probably have fans talking for months, if not years.