Review: Something Fresh by PG Wodehouse 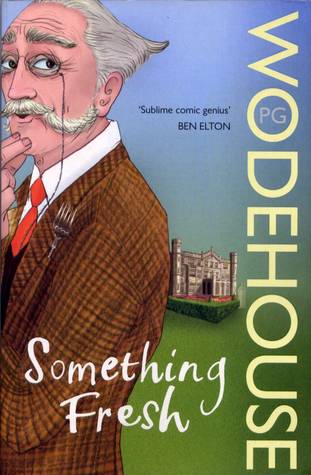 As well as Jeeves and Wooster, author PG Wodehouse penned another much loved series, Blandings. Featuring the dotty Lord Emsworth, and some other eccentric characters (including a pig,) this series is rarely out of print and at one point was adapted for television by the BBC.

Something Fresh is the first Blandings novel, first published in 1915. And while readers are introduced to dotty Lord Emsworth, the real stars of this one are Ashe Martin and Joan Valentine, a pair of twenty-somethings who, on the lookout for a bit of an adventure, find themselves posing as servants at Blandings in order to steal back a particularly valuable scarab that Lord Emsworth unwittingly placed in his pocket, much to the ire of the father of his son's fiancée. Various misunderstanding abound though everything works out for the best in the end.

This was an enjoyable light read that spends a lot of time making fun of Britain's idle rich, amidst some truly funny descriptions. While by no means PG Wodehouse's best novel, it is certainly a lot of fun and a solid introduction to Blandings.