Review: It Sounded Better in my Head by Nina Kenwood 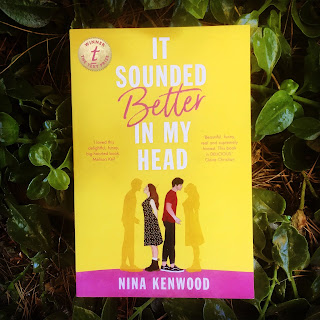 There is one simple truth that everyone who ever graduated from an Australian high school with plans to go to uni knows. The few weeks between receiving your ATAR and being offered a place at university is one of the most awkward, nail biting times of your life. Written with a whole lot of heart, It Sounded Better in my Head is set during those few weeks. Natalie has just finished year twelve and received her ATAR, and things should be all right over the next few weeks.

And then her parents announce that they are splitting up.

Meanwhile, her two best friends, Lucy and Zach are now a couple. Natalie would feel like a bit of a third wheel, except for the fact that she's suddenly getting a lot of attention from Zach's brother Alex, a ratbag with a lot of rowdy friends. Lucky he has a big heart.

Suddenly, Natalie doesn't know who she is, or how she fits in with things anymore. And life isn't like the picture she had in her head.

This was an entertaining read, set in a time that will be instantly relatable to anyone who graduated from high school with aspirations to go to university. Natalie makes for an interesting character, a reclusive teen who finds herself slowly making contact with the outside world, and who has little idea or understanding of how to navigate a very awkward first relationship, especially when she has no one to confide to.

At times Natalie's naivety was hilarious, though at other times it felt as though the author pushed the envelope a little too far and it could become annoying. On the whole though, this is a warm and fuzzy book that should tick all the boxes for its target audience, while having enough there to be enjoyed by adult readers.

This book was read as part of the Aussie Author Challenge 2020.
It Sounded Better in my Head Nina Kenwood