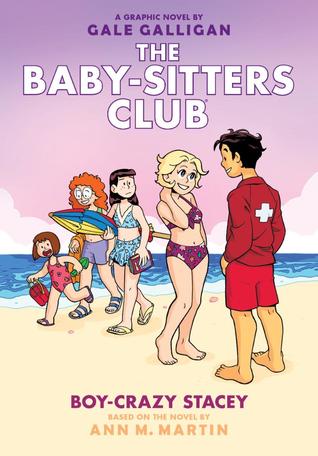 The BSC Grapix series is back with another fine adaption of another beloved Baby-Sitters Club title. Old fans often remember this particular title with a special kind of nostalgia. After all, this is the novel that introduces readers to Sea City, a location that would appear in the series several times. It also features beloved original character Stacey in her second adventure, and one that is a lot more lighthearted and fun than her previous story. And if that wasn't enough, it is also the first time that we see the two most different original members of the club--Stacey and Mary Anne paired together, and they make for a surprisingly strong pairing.

Anyway, for the uninitiated, the plot for this one is pretty straightforward. Stacey and Mary Anne accept a two week baby-sitting assignment to accompany the Pike family (yep, that's the one with eight kids,) to their favourite holiday spot in Sea City, New Jersey. While they are there, Stacey develops a crush on an older lifeguard, and neglects her baby-sitting duties much to the frustration of Mary Anne who one, doesn't want to get left with all the work and two, fears that Stacey is going to end up very hurt by Scott. Fortunately, there are a couple of boy baby-sitters in Sea City who help the pair to set everything right, and the Pike kids all do a good job of keeping things entertaining. And Stacey comes up trumps when she helps Byron get over his fear of water.

Galligan's illustrations give the story a fun and contemporary feel, and add some much needed diversity into the story. In all honesty, I probably enjoyed this one a little more than Kristy's Big Day as it felt a little less rushed.

In other news, while Gale Galligan will be finishing up with the BSC Graphix series following the release of Logan Likes Mary Anne in September, the BSC Graphix series is set to continue with six more titles to be released, two a year from 2021. In the meantime, fans can also enjoy Karen's Witch, the first of the Baby-Sitters Little Sister books to be adapted as a graphic novel, which was recently released in the United States, and will be released in Australia in February 2020.

PS Stop by tomorrow for my BSC Graphix wish list.