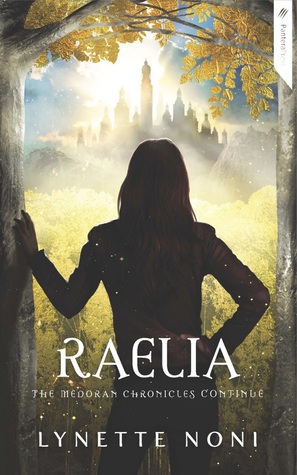 With one heck of a cracker of a cliffhanger ending, Raelia, the second book in the Akarne series is filled with plenty of twists and unpredictable situations. Alexandra Jennings has once again stepped through the door to Medora and finds herself back in Akarne for her second year of schooling. From there, she unwittingly finds herself enrolled in an SAS type elective that takes up most of her Saturdays and seems to keep putting her in contact with the Lost City of Meya and the horrible, disgraced prince Aven, who would do anything to reclaim what he considers to be his birthright.

Aussie author Lynette Noni does an excellent job of bringing the fictional world of Medora to life and in Alex has a lead character who is both heroic yet easy to identify. Readers learn a little more about the history of Akarne and the likely career paths of the characters once they finish their studies, however, the real story lies in first in Alex's adventures in Espionage, her visits to the Lost City of Meya and the eventual discover that things may not be quite right with one of her friends. Overall, this one is an enjoyable escapist read. Some parts of the novel are done better than others--for example, it is difficult to understand why no one noticed the sudden change in Jordan's behaviour, however, the novel's many twists and turns more than make up for that.