Review: The Code of the Woosters by PG Wodehouse 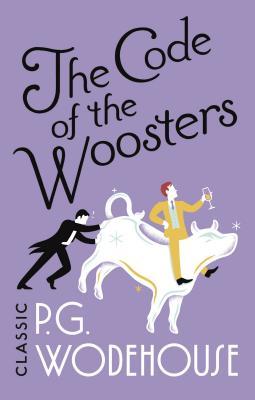 The Code of the Woosters is generally considered to be the best of all of the Jeeves and Wooster novels and it is not at all difficult to see why. Lighthearted fun abounds amidst a whole lot of spectacular wordplay and a dig at England's upper classes of the period just before the Great Depression. Bertie Wooster has been employed by his Aunt Dahlia to steal a silver cow creamer from Sir Watkyn Bassett at Totleigh Towers so that it may be returned to its 'rightful' owner, Uncle Tom. Meanwhile, at Totleigh Towers a misunderstanding has occurred between Bertie's old friend Gussie and his fiancee, Madeline Bassett, and Gussie wants Bertie's help in sorting it out. Then there is Madeline's cousin, Stiffy Bing who (unaware of Aunt Dahlia's plans,) wants Bertie to steal the cow creamer and have her beloved Stinker Pinker catch him in act, so that he may look like a hero in front of Sir Watkyn so that he may approve of their marrying. And then there is Roderick Spode, the menacing friend to Sir Watkyn who dislikes Bertie and who, if he finds a half reasonable excuse, will beat him to a jelly. Bertie, it seems, is going to need all the help he can get from his faithful manservant Jeeves to get out of this one.

The Code of the Woosters is brilliant comic fare, poking fun at the idle rich as they bumble about with their various whims and fancies. Though stupid, and a little arrogant, Bertie makes for a sympathetic hero as he bumbles through the situation, and generally trying to do his best to help where he can and slide out of everything else. And Jeeves, as always, is the perfect hero.

Highly recommended.
PG Wodehouse The Code of the Woosters