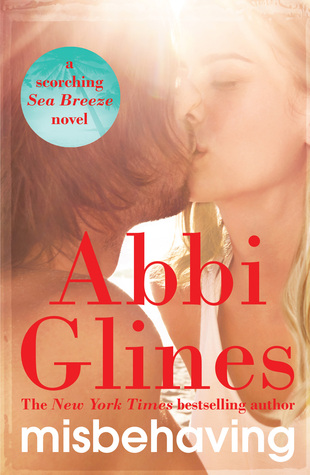 It is difficult not to love Abbi Glines. At times, I can be a bit meh about NA romance, but I have an amazing about of respect for this author and her career. Glines not only knows and understands her target audience well, but she has done seemingly the impossible, moving smoothly and swiftly from independently published author to a best selling author with an astounding number of titles under her belt. Misbehaving is the latest Abbi Glines title to be released in Australia and forms the sixth novel in the Sea Breeze series. It is the first novel I have read in the series and I have to agree with the promotional material on the front cover that this is a scorching novel.)

Misbehaving tells the story of Jess who is not only the bad girl in the community of Sea Breeze, but who is also badly misunderstood--and through the narrative, we soon learn why. As the novel opens, we learn that she is twenty years old and was raised by her single mother who works as a stripper at a crudely named bar. We also learn that Jess's boyfriend has been cheating on her and she has decided to teach him a very well deserved lesson, which goes wrong. Or as Jess puts it:

The sound of feet hitting the pavement let me know I was being chased. Well, shit. Not what I needed. I was having so much fun. Hank deserved that. He did. He was a rat bastard. I did not want to go to jail over this. Plus my momma would be pissed (p.4).

And then a comic twist in events lead Jess to Jason, a young man who is grappling under the shadow of his rock star brother.

Shifting perspectives back and forward between Jason and Jess, the novel tells the story of their rocky, but sexy relationship and their personal struggles. As I have not read the other novels in the series, it was a bit difficult to keep up with some of the stories about other characters who obviously form an important part of the series, but this did not distract from the story. There was a bit of a time jump partway through the novel which was a little annoying.  Misbehaving is a quick, escapist read and it's images of sun and romance were a perfect distraction on a cold winter afternoon. Recommended for those moments when you just want to take some time out.

Finally, a big shout out and thank you to Simon and Schuster Australia for my review copy.
Abbi Glines Misbehaving Sea Breeze