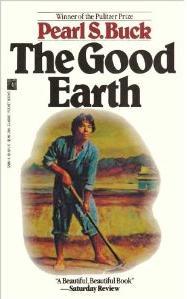 Pearl S. Buck's Pulitzer Prize winning novel The Good Earth tells the story of Wang-Lung, an ordinary farmer living in China in the years preceding and following the Xinhai Revolution. The novel is concerned mostly with Wang-Lung's family and domestic life, opening with his marriage to the former slave O-Lan and details the many years that follow in which he suffers many hardships before eventually becoming a rich and important man within his village.

Although a little slow in places, I enjoyed reading The Good Earth and its often heartbreaking account of family life. As a female reader, it is difficult not to feel some anger at the way female characters were treated. O-Lan is little more than a slave to her husband despite her resourcefulness and eventually is eventually cast aside in favour of a concubine that Wang-Lung finds more attractive; the oldest daughter is known as the Poor Fool for her mental impairment and ignored by everyone while their second daughter is killed minutes after birth to spare the family the burden of an additional mouth to feed. There is also the troubling story of Pear Blossom, the very young woman that Wang-Lung takes as a concubine in his old age. But still, this is a reflection on the time and place where the novel is set, and daughters were often regarded as a burden as they could not provide for the family and could only go on to become a part of other families--as wives, slaves or worse. O-Lan herself had been sold as a slave as her family was poor and she was considered to be plain and not a good wife. (She was eventually gifted to Wang-Lung by a rich family who did not need her.) Meanwhile, Lotus, Wang-Lung's concubine had been sold into prostitution as she was considered beautiful. The sons are depicted as thoroughly selfish characters, though the middle son appears to be the most resourceful of the three. The novel ends with the suggestion that the two sons will sell off the land that Wang-Lung has worked so hard for.

American author Pearl S. Buck (the daughter of missionaries and spent a considerable amount of her youth in China,) does a convincing job of depicting the novel from the perspective of a man from a small Chinese village. Parts of the novel are slow and heartbreaking to read, but worth the effort. Recommended.

Andrew Leon said…
Oh, man, I had to read that book so many times when I was in school, and I hated it almost every time. I will admit, though, that I hated it less the last time I read it than I did the first time.
3 July 2014 at 08:53

Kathryn White said…
I can see how this one may not necessarily appeal to a school age boy who is being forced to read it, though I think it is a brilliant novel in its own right.
3 July 2014 at 19:34