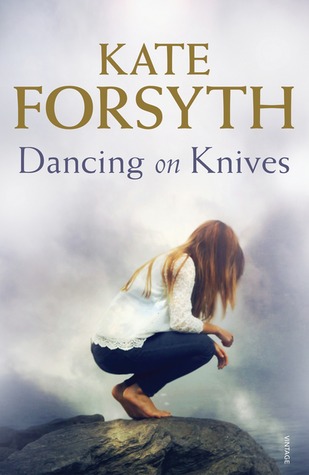 There are times when, by some kind of quirk or twist of fate, exactly the right book can be delivered into my hands at exactly the right time. And that is what happened when, searching for another book entirely,* I stumbled upon a copy of Kate Forsyth's Dancing on Knives. Although I follow the author on facebook, I had no idea that she was releasing a new book and have been more familiar with her fantasy novels and books that go behind the scenes of various fairytales or that retell them such as The Wild Girl and Bitter Greens. Anyway, I happily snatched a copy of Dancing on Knives up and began reading it over lunch. And maybe it is just because I am writer who has been struggling a bit with her craft, but I found the note from the author at the front explaining the novel's long journey to publication (actually, republication, as the novel was previously published in 2003 under the author's maiden name and under the title of Full Fathom Five,) to be quite inspiring and offered me a much needed reminder about not giving up.

Anyway, positive messages found in notes from the author aside, I found myself completely and utterly drawn in to the story of Sara, a young woman who has not left her family home for five years. The title comes from Sara's favourite fairy tale--The Little Mermaid--and describes how she feels about herself. Sara's family situation is quite difficult. Her mother died when she was still a child, and her father is an eccentric and ultimately selfish artist who married his mistress shortly after the death of his wife. It's pretty obvious that Augusto Sanchez is oblivious to the emotional needs of those around him. Rounding out the family is older brother Joe, slightly irresponsible twins Dominic and Dylan and naughty, mischief making half-sister Teresa. When Augusto is found hanging from the edge of a cliff, the question is soon raised in Sara's mind whether it was an accident or if he has met with foul play. Plenty of characters have reason to have killed him--particularly those from the family of Sara's mother and his own children.

The mystery of Augusto's killer aside, Dancing on Knives is also an absorbing coming-of-age tale. It is interesting to see how Sara copes with her self-imposed imprisonment (she suffers panic attacks whenever she leaves the house,) and how the events unfold, allowing her to gain an newfound maturity and strength. There is a bit of romance in the story, thanks to farmhand Matt, and I think that element will having strong appeal with young, female readers. Parts of the ending feel a little too optimistic, but the ending is a satisfying one, regardless. Highly recommended.

*In an even stranger twist to my little story, that book I was searching for was Lost and Found by Brooke Davis.
Dancing on Knives Kate Forsyth