Review: We Are Inevitable by Gayle Foreman 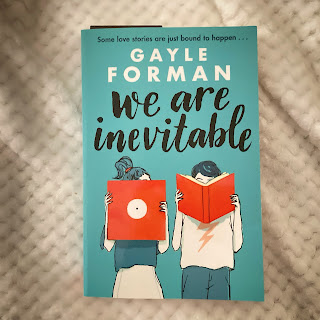 Deceptively packaged as a love story, We Are Inevitable is a story of addiction, the many forms that it may take and its impact.

Aaron Stein isn't the happiest of eighteen year olds. His older brother is dead. His mother has left the family home to find herself. His father is in denial from well, everything. The family bookshop he now owns is one step away from ruin. And they're all struggling with the huge medical bills that his older brother Sandy left behind. Then two things happens to change Aaron's life. The first is that he secretly sells the bookshop to this selfish and infuriating old woman who lives in the town. The second is that he strikes up an unlikely friendship with Chad, a popular boy from his high school who is now wheelchair bound following an accident. Through Chad, he meets Hannah, a musician with whom Aaron feels a strong bond, and with who he believes a relationship is inevitable. Then Chad and some other locals come up with a plan to save the bookstore, and Aaron finds himself dragged deeper and deeper into a web of lies when he finds that he cannot be honest and tell the people he loves that he's sold the bookshop ...

What a quietly clever story this turned out to be. Through the bitter and often unlikable Aaron, Gayle Foreman gives readers a clear picture on why addicts do the things they do. Aaron's behaviour throughout the novel often mirrors that of people who are trying to hide their addictions through denial to themselves, and through various lies and deceptions to the people closest to themselves, and through various desperate acts. Running parallel to the story of the bookshop is Aaron's relationship with Hannah, one that he cannot always view realistically, due in part to his age and situation. Although it's clear that Hannah likes him, she has her own issues and a more realistic outlook on the world. Compounding this is the fact that Aaron does not always act in her best interests. The ending, while it has some truly lovely moments, is more realistic than saccharine sweet, which gives the novel a deeper edge. I also loved how each chapter related to a different book, and the meditations on why every small town needs a bookshop.

Gayle Forman We Are Inevitable