Review: The Guncle by Steven Rowley 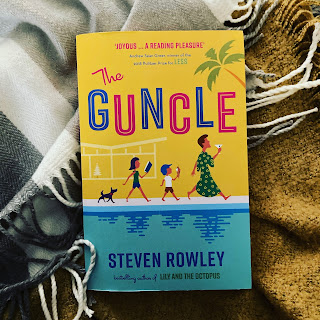 Steven Rowley is back with The Guncle a novel that is funny, touching and has a whole lot of heart. Patrick is a former sitcom star living a quiet but luxurious life in Palm Springs. The rest of his family live on the other side of the country. When a tragic turn of events occurs, Parick, or Gay Uncle Patrick as he is sometimes known, is tasked with looking after his niece Maisie, and his nephew Grant for a while. Patrick loves the kids, but up until now, time spent with them has always been in small doses. Is he up to the task of looking after two kids who are grieving for their mother, and whose father is in rehab? There's only one way to find out.

This was a fantastic read. In some ways, the story reminded me a lot of Uncle Buck, one of my favourite movies from my childhood. But there are also some deeper twists in there--for example, the real reason why Patrick gave up on acting and became reclusive is utterly heartbreaking, and its touching to see the way he helps Maisie and Grant grieve for their mother, ultimately helps him as well. Meanwhile, his older sister Clara, who is opposed to the kids staying in Palm Springs, makes for an interesting antagonist and I appreciated the way that the author handled her story arc, presenting her as a woman who is hurting and lashing out because of that hurt, rather than just portraying her as an evil aunt. And we also get to see Patrick show her some kindness, which gives the story some additional depth.

Overall, I really enjoyed The Guncle and I was thrilled to learn that it is already in development as a motion picture. Truly a great story with a lot of heart and depth.

Thank you to Simon and Schuster Australia for my copy of The Guncle.