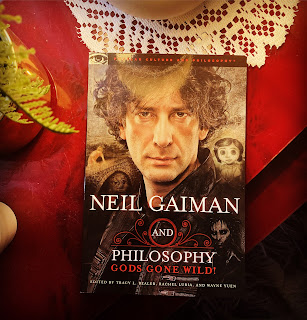 The long-running Popular Culture and Philosophy series turns its focus to legendary and beloved author Neil Gaiman, drawing comparisons between his work and the musings of various famous philosophers. Unsurprisingly, a great deal of the work is spent discussing American Gods, but the volume really picks up momentum when it discusses some of Neil Gaiman's other works, in particular Coraline and the Sandman Comic.

Told in a series of academic essays penned by a variety of readers with a background in philosophy who are very clearly fans of Neil Gaiman, this was an entertaining look at the work of one of my favourite authors. At first, I was a little concerned that this was going to be full of so-called "hidden meanings" that could be found within Neil Gaiman's work, ones that could only be interpreted by special people (ie the authors and editors of this book,) but thankfully the volume was free of that. It works more like an introduction to philosophy, taking something from popular culture that the reader is already familiar with, and showing how the stories work in with various concepts. While I didn't agree with everything the authors suggested, I found the journey to be entertaining.