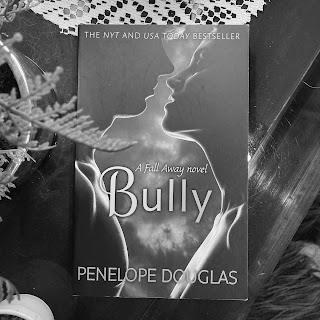 Once upon a time Tate and the boy next door, Jared were the best of friends. The pair were practically inseparable until one summer, when Jared went away. He returned a different boy. Moody, unapproachable and with an almost insatiable and unexplained hatred for Tate that spilled over when the pair started high school. Tate became the victim of a cruel and almost relentless bullying campaign created by Jared and his friends, one which most of the other kids at school played along with. To escape the bullying, Tate spent a year studying in France. But now she's back for her senior year, smarter, stronger and more determined than ever not to let the likes of Jared get to her.
As for Jared ... well, it seems that he likes this new version of Tate.
Bully may be set in a high school, but this is most definitely not a YA novel. In fact, it is not one that I would recommend to teenagers at all--I found many of the themes to be quite harmful, and the story full of unfair and toxic male and female stereotypes. As a romance with an added dash of revenge fiction, however, it has some truly entertaining moments and I found myself almost addicted, rapidly turning pages, even if the situation is well, unbelievable. (What kind of parent, who hasn't seen their daughter for an entire year, lets her stay in the family home, unsupervised for months on end when the boy who made her life hell lives next door and has been causing all kinds of trouble?)
It is what it is. Readers looking for a trashy, escapist novel will find plenty of fodder in here. There are explanations for Jared's behaviour, albeit highly sexist ones. (Seriously, he spread rumours about her because he couldn't stand the thought of other boys dating her and potentially treating her badly?)
But, as I said, it is what it is.
Bully Penelope Douglas