Review: No One is Too Small to Make a Difference by Greta Thunberg 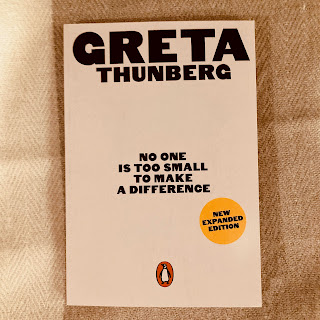 No One is Too Small to Make a Difference is a collection of speeches by Climate Change activist Greta Thunberg. A Swedish teenager with Aspergers, Thunberg first came to prominence a few years ago through an unusual form of activism--striking from school every Friday and protesting outside Sweden's parliament about that countries environmental policies. From there, other activists and the media caught on, the movement grew worldwide and Thunberg has been able to bring her message in the form of speeches, ones that are often frank and uncomfortable, at various global conventions and summits.

This volume collects those speeches.

While I don't agree with absolutely everything Thunberg says or even how she gets her message across, there is no denying that her story and her unwavering belief that she is doing this because she feels it is right, is an important and powerful one. Very few people are able to achieve the level of activism that Thunberg has at such a young age, and in such a relatively short space of time. (Though Thunberg may argue that she doesn't have the luxury of time.) It is interesting also, to hear what she has to say on her own terms, without the interference of media and its bias.

Greta Thunberg No One is Too Small to Make a Difference