Review: The Girl Who Reads on the Metro by Christine Feret-Fleury 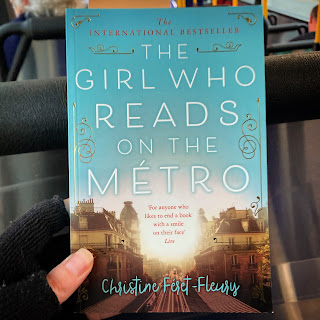 Beautiful and at times, sad, The Girl Who Rides on the Metro is a story about the transformative power of books. Juliette travels on the train to a job that she despises each morning. She takes some pleasure in taking note of what other passengers are reading. Then one day, Juliette finds a strange urge to get off the train, and soon finds herself in front of a second hand bookshop. When she meets the eccentric owner, he tasks her with giving away five books to strangers. What begins is an adventure on the transformative power the books have on other peoples lives.

I very much enjoyed the concept of this one. While parts of the story were quite strong and I was more than willing to suspend my disbelief in places, I found other parts of the story infuriating for their lack of backstory and depth. We never really see, or know the people that Juliette gifts the books to, in spite of it being a major theme of the story. In fact, I often felt little sense of Juliette or of Soliman, the mysterious bookshop owner. On the other hand, there are some truly delightful moments, such as Juliette's acquisition of the yellow submarine.

Overall an interesting read, with some moments of joy and moments of sadness.

Christine Feret-Fleury The Girl Who Reads on the Metro