Review: To Kill a Mockingbird: A Graphic Novel by Harper Lee & Fred Fordham 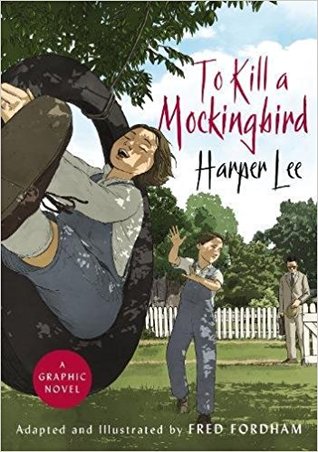 Harper Lee's famous novel To Kill a Mockingbird is beautifully adapted as a graphic novel in this lovely hardcover volume published by Penguin Random House. Many of you will already be familiar with the story of Scout, her father Atticus and the events that take place during the novel--and if you have not read it then, surely, at one point or another you would have seen the film. Consequently, I will not retell it here.

This volume retells the story, this time, placing an emphasis on the differences between the carefree childhood experienced by Scout, her brother Jem and their friend Dill, and that of the huge burden of responsibility felt by their father, who is the defence lawyer for an innocent black man accused of a horrible crime in Alabama in the 1930s. This particular adaption paints an interesting contrast between innocence and responsibility, and how young Scout--and indeed, her father--learn some tough lessons. (And remember, it's a sin to kill a mockingbird.)

The illustrations are beautiful and echo the film in many places.