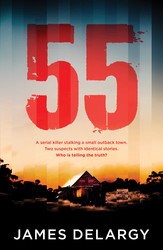 This is most definitely not a novel for the faint of heart. Brutal and unflinching, 55 is for hardcore readers of crime. Chandler Jenkins is a police sergeant in a sleepy country town. One day, a young man named Gabriel stumbles into the station claiming that he has just escaped a serial killer, a man named Heath who claims that he has killed fifty-four people before him, and that Gabriel is to be victim number fifty five. Not long afterward, a man named Heath arrives at the station, and tells the same story, except that in his version, Gabriel is the killer? Which man is telling the truth?

Reader be warned--you're in for a twisty ride with this one, littered with lots of brutality and plenty of heartbreak, especially for Chandler. The novel is every bit as harsh as the Western Australian landscape that the author depicts in many parts of the narrative. However, some great twists and an intriguing hook are let down in places by the usual crime novel cliches--a police officer with a troubled personal life investigating a horrific crime, an inspector who has it in for the sergeant and an ex-wife who most definitely isn't worth it. As other reviews have alluded to, the novel ends with one heck of a nasty surprise--and the onus is on the reader to decide what it all means.

For fans of Wolf Creek.

Thank you to Simon and Schuster Australia for my reading copy.

Note: I have seen some contention online about the nationality of the author. According to the official bio on the publisher's website, he was born and raised in Northern Ireland, and has lived in South Africa, Australia and Scotland and now lives in England.